Staring into the Abyss – Book Review 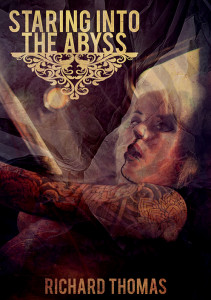 Staring into the Abyss

I was unfamiliar with Richard Thomas’ work before reading his short story collection STARING INTO THE ABYSS.  The twenty stories included here cover such a breadth of genres and types of stories that this is a difficult collection to review or even summarize.  As the title seems to imply, these stories all deal with the dark side of human nature, what happens when ordinary people make choices and contemplate actions that could transform them into monsters or transport them into the eponymous abyss.  That’s a hopelessly vague description, so it’s probably best to delve into some of the collection’s stories for a closer look.

Some mild plot spoilers for a handful of the stories in this collection follow.

This is a genuinely interesting mix of stories: some clearly fantasy or science fictional, most containing distinct horror elements, and a few almost mainstream fiction, though even these all have an edge.  The collection opens with a short piece about an old man who seems imprisoned in a tower making mechanical birds.  It’s certainly an evocative piece, but it was almost more of a vignette than a complete story, so I was unclear on where the collection was headed.  A couple stories later and we’re reading about a man whose life has spiraled downward to the point where he’s ready to end it all.  Some of the stories are small pieces, almost slice of life tales; consider, for example, a quick piece about a couple who visits an underground sex club and wrestles with issues of temptation and jealousy.  Another explores the efforts of a neglected boy who has been left to his own devices to fend off a boogeyman who visits him every night.  Even amid the horror, there are plenty of just plain fun stories to lighten the mood, even though these too always have a dark tinge to them.  “Stephen King Ate My Brain,” which is about just what it sounds like, is a good example of this type of story.  I would be remiss if I didn’t mention the longest story in the collection, “Victimized.”  This is the story of a world in which crime victims – in this case, a young woman who has been sexually abused by a family member – are permitted to confront their victimizers in a no holds barred boxing match/slugfest to the death.  In unskilled hands, this could be trite, but Thomas does a great job with such a challenging premise.

Some of these stories are genuinely haunting; I’ve found my mind wandering back to several of them, even days after reading them.  At their worst, a few of the stories in the collection feel more like vignettes than complete tales, but most are very well-executed and have real bite.  The worst thing I can say about the collection is that, thematically, it’s a bit scattershot.  This is essentially a kind of portfolio of Thomas’ writing, and because he writes a lot of entirely different kinds of stories, there’s a lack of thematic focus.  Having said that, I certainly recommend STARING INTO THE ABYSS for those interested in reading a selection of stories that cross traditional genre boundaries.  It’s a smorgasbord of Thomas’ prose in all its forms, and that’s very much a good thing.  Richard Thomas ably demonstrates his skills as a writer interested less in traditional genre boundaries and more in just telling a good story, and I look forward to reading more from him.