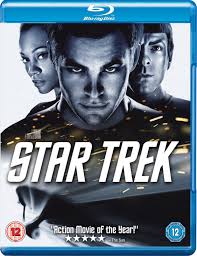 First off, if you look at the back of this new Blu-ray/DVD combo pack from Paramount, it gives away the “big secret” right there. So if they can do it, I can do it too. However, I am better than they are, so I will still try to dance around it here. However if I slip, I don’t want to hear anyone crying about spoilers. And besides, if you have any interest in this movie at all, then chances are high that you already know the secret. But just in case you haven’t heard, consider yourselves warned.

Into Darkness continues with the bit too slick for my tastes reimagining of the classic Star Trek universe, where everything inside of the famous Enterprise looks like an iPad, and you can go blind from the amount of lens flare director J.J. Abrams stuffs into the movie. Thankfully on that last point, it seems like Abrams has tried to keep his fetish in check. No, there’s still plenty of annoying lens flare in here, but at least it’s not in every single shot. So that’s something, right? But what about the story?

Well it’s the second film in this new series, so naturally it tries to reinvent what is easily the best movie from the original series. Was that a bold, brave move, or just pandering to the fans? Perhaps a bit of both. It takes what is familiar with that other movie, spins it around and turns things on its head. Sometimes it works, sometimes it doesn’t. Odd bits still remain, like the baddie of the piece being the whitest Indian ever, but I digress. At the heart of the story is the ongoing bromance between Kirk and Spock, so much so that most of everything and everyone else melts away into the background. That means many of the other characters are reduced to glorified cameos, and that’s a shame. This is especially true for Karl Urban as Bones, who was always the third part of the original Trek trinity. Here that classic trinity has most certainly become a duet. There is also some unnecessary bits shoehorned in the film for what I can only assume is blatant fan service. And no, I’m not even talking about the gratuitous hot girl in her bra and panties scene. I’m thinking of the Klingon subplot that really goes nowhere.

Now not everything is all bad here. Peter Weller gives one of his best performances in years as a very complicated character with his own motivations that, while you may disagree with, you nonetheless feel that he totally believes in. Then there is Benedict Cumberbatch as you know who. I must admit that I like the other guy in the other movie in this role much better, and not just because that’s who I grew up with. I just liked his take on being obsessed with revenge more than Benedict’s here. I am a big fan of the Sherlock Holmes star, and he wasn’t bad here, he was just in the huge shadow of who came before him. More in the win column, at least for those that like to see things go boom, are the action scenes that are ratcheted up to 11 in this film. They are easily more bombastic here than any Trek movie before. There are other bits I liked, but they would dip into spoiler territory, so I’ll give them a pass here.

The new Blu-ray from Paramount looks absolutely amazing. Seriously this movie was designed from the ground up to be eye candy, and this disc delivers the goods. As for the special features, there are some really good ones here. My favorite is the featurette on “you know who” that’s all about his character, from the beginning to his reimagining here. There is a featurette on one of the action set pieces and another on the new take on the Klingons I mentioned before.

Star Trek Into Darkness, despite having a stupid title (there, I said it) was a pretty good sci-fi action romp. An enjoyable watch. Is it as good as the film it’s remaking? No, but then that’s a classic in every sense of the world. But it’s not bad. If you can look past some serious plot holes and try not to compare it to what it’s trying to replace, you can have some fun with it. So it gets a recommendation from me.

Sorry, I couldn’t help myself, I really couldn’t.