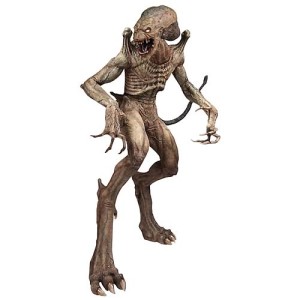 Hellnotes welcomes Brian Engel, who will be contributing a series of occasional columns on classic horror.

Monster movie classics have a wide range in creativity, strength of execution, and campiness. This was never more true than in the 1980s, when monsters more often than not took the form of human killing machines, rather than fantastical creatures. Pumpkinhead was one of the few exceptions.

In 1988, famed special effects god, Stan Winston made his directorial debut with the iconic monster film. Winston had previously made a name for himself as the go-to special effects guru to science fiction and horror films. He brought to life The Terminator, Aliens, Predator’s mandibled commando hunter, Edward Scissorhands‘ appendages, and Danny Devito’s gruesome visage as “The Penguin” in Batman Returns. He’s inspired several other makeup effects artists, with other makeup crews replicating some of his classic work in the the recent remake of The Thing.

Needless to say, no matter how Pumpkinhead turned out, with Winston at the helm the film was guaranteed to produce (if absolutely nothing else) a cool-looking monster. The film is hardly perfect, and that lends to its appeal, since the imperfections are largely what make films like this endearing to fans. Lance Henriksen led the cast of largely unknown actors in a movie that was more driven by creepiness and atmosphere than a coherent (or conceptually innovative) plot.

Although well known as a B-movie staple, Henriksen has had forays into A-list films, and his performance gives the film a sense of legitimacy. By this time, Henriksen had a strong working relationship with Stan Winston, with the two having also worked together on the sets of The Terminator and Aliens.

Pumpkinhead is set in a remote Appalachian village, and Henriksen is a father raising his son among a community of isolated eccentrics. When the son is killed in a senseless accident, Henrickson enlists the help of the local witch to exact revenge on the group of irresponsible teenagers that caused his son’s death.

The revenge comes in the form of a bizarre looking demonic creature whose body is harvested from the pumpkin patch in the local graveyard. The creature, a demon that can be conjured to do the bidding of its conjurer, is fairly original looking, although he does bear some resemblance to the titular alien from the Ridley Scott films, of which Winston developed the alien seen in the much-lauded sequel.

The film then follows the rampage of the newly resurrected demon of vengeance and the battle to contain it once again. Although the special effects are strong, the story is riddled with plot holes and curious occurrences that cannot be explained (but that hardly makes Pumpkinhead unique).

A Nightmare on Elm Street and Friday the Thirteenth introduced cold-blooded monsters to audiences in human form, but Pumpkinhead thrust a new kind of monster into the horror world, making this film, and its creature, unique. In an age when masks and makeup were commonplace, Pumpkinhead deftly employed the use of puppetry and camera trickery .

Horror movie buffs have a “take it or leave it” attitude when it comes to this film. Some love the film and see at as a “so bad, it’s good” feature, while others simply view it as a bad movie with exceptional special effects. Critical response was mixed: many praised the special effects, and expressed dissatisfaction with the film’s writing and acting. However, the film has retained a loyal cult, and it’s enjoying newfound popularity thanks to regular screenings on the El Rey Network that was recently made available to Comcast and Direct TV subscribers (click here for more info), and late night screenings throughout the United States.
Pumpkinhead is distinguished from the rest of the pack by the quality of the special effects, which could only have been achieved by Winston’s genius and expertise in the field. Unlike science fiction classics Aliens and The Terminator, which bear the distinctive Winston effects, Pumpkinhead is purely horror. Was Winston a peer of Hitchcock, in terms of his mastery of the medium of film? Not quite. But this much is certain: he was one of the best visual effects specialists of his time, and he is sorely missed.