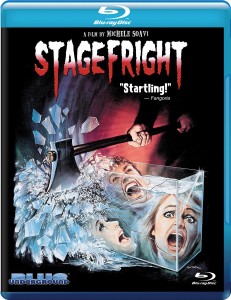 Not to be confused with the disappointing slasher/comedy/musical from 2014, Stage Fright (sorry, that movie started off strong, but quickly jumped right into the crapper), this is the 1987 slasher/giallo hybrid that has flown under the radar of many a fright fan, and that’s a shame, as it’s loads of fun. This Stage Fright (AKA Aquarius) has always been a favorite of mine, and now it’s on Blu-ray for the first time from the good people over at Blue Underground. So I dig the flick, a lot, but is the new Blu worth the upgrade cost? Well grab your chainsaw and giant owl mask and let’s find out.

In this film, a troupe of actors are practicing a stage play based on an infamous actor/serial killer named Irving Wallace. One of their number sprains her ankle, so she and a friend takes off to go find a hospital. Unfortunately, there’s no hospital around for some reason, but there is a nearby asylum for the criminally insane, so they go there. Makes sense to me! One there, they happen to mention that they’re working on a play about Irving Wallace, and wouldn’t you know it, that killer just so happens to be in that very asylum and overhears them. So Irving escapes, follows the women back to the theater, and then quickly murders one of them outside with a pickaxe through her mouth. Nice. Now unlike most slashers, this murder is quickly discovered and the cops are called, but when it’s all said and done, the director of the play convinces all of the actors to stay through the night and practice, practice, practice, planning to use the vicious murder of their friend as a PR stunt. Yeah, he’s a real charmer. The desperate acting troupe all agree to this and the police leave a pair of dim bat cops outside the theater in a squad car to keep an eye on things. Naturally, the cops don’t deter Irving from sneaking into the theater, locking down the fortress-like building, and then picking off the actors one by one.

What makes this movie stand out for the rest of the glut of slashers that came out in the 80s, is the weird vibe to it. For me, there has always been a bit of a giallo undercurrent to it. It is a bit sexier and nastier than your typical American slasher, and that’s got to be because it was directed by Michele Soavi, and written by “George Eastman” (born Luigi Montefiori) who was the writer/actor of  Anthropophagus (1980) and Absurd (1981). So there is a lot of Italian influence in this film, and that is more than alright with me.

Additionally, there are some great kills for the diehard slasher fans out there. There is the usual nice variety of weapons used, including that old favorite that never gets enough play: the chainsaw. Oh, and did I mention the awesome giant owl mask that the killer wears? Yeah, it’s crazy, but so damn cool. They try to explain it as the play the actors were rehearsing was about “the night owl” but basically that’s just an excuse for giving the killer an outlandish, but very memorable, look. I know I’ve never forgotten it.

The new Blu-ray from Blue Underground, in addition to a great looking HD transfer of the movie, comes with some nice extras on the disc. There are five interviews, one with the director, two with actors, one with the makeup effect artist, and the last with the composer. Altogether, these run over 74 minutes. The theatrical trailer, and a poster and still gallery can also be found here.

I love Stagefright. Its pure 80s slasher fun, with a hint of giallo goodness in the mix for good measure. The kills are brutal and bloody, the killer has a great, if crazy, look, it is well made and the acting is better than the norm for such things. If you are a fan of 80s fright flicks, you need to have this in your home library. If you already have it on DVD, the Blu-ray is a very worth upgrade. Consider it highly recommended.