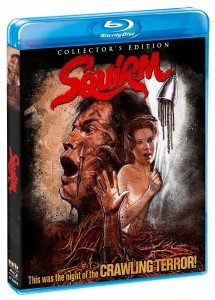 In the 1970s and 1980s they were making killer (whatever) movies by the bushel. From rats, to cockroaches, to frogs, to even flesh-eating slugs. Hell, Night of the Lepus was about killer giant rabbits. So in the light of all that, is 1976’s Squirm, a movie about killer earthworms all that ridiculous? Well yes, yes it is, but is it any good? Does it fall into that beloved “so bad it’s good” category, or is it just bad-bad? Well, put on your long boots, try to avoid the mud, and let’s find out.

The story starts off with a fierce storm that drops a high power electric line into the wilderness around a small Georgia town. Naturally that supercharges the ground and turns all the worms in the earth into a man-eating, swarming hoard. Because you know, science! Before you can say, “Are you kidding me?” the worms start going on a nighttime rampage, stripping the flesh from the bones of anyone unlucky enough to cross their path.

The main characters here are a young local girl and her big city beau. In usual fashion, no one believes their tales of murderous worms (I mean, would you?) until it’s too late. No, there’s no mayor keeping the beaches open here, but there is a hick sheriff who takes an instant dislike to the city boy, and therefor ignores his every warning until he, himself, becomes worm food. Additionally there’s a bit of a love triangle between the young lass, her new love, and a somewhat dimwitted local boy who raises worms for a living. When he encounters the flesh-eating squirmers himself, he doesn’t die to them, but instead becomes a lustful madman with worms hanging off his face. Yes, it is as wonderfully weird as all that.

Now I am a lover of cheesy cinema, and this film almost reaches the heights of that silly subgenre, but it runs a bit long with not much happening at the start and in between worm attacks. However, once the worms are on the move, this flick comes alive. If you ever wanted to see a tidal wave of worms wash over people and eat them down to nothing, then this is the movie for you. Add some over the top dialog, a dollop of nudity, and plenty of corny country characters, and you have yourself a good time. That is, if you’re into that sort of thing.

On to the extras on this new Blu-ray from Scream Factory. First there’s an audio commentary with writer/director Jeff Lieberman. There is also a making of featurette that’s 33 minutes long and an interview with Jeff Lieberman that’s just over 7 minutes. A theatrical trailer, TV and radio spots, and a still gallery can also be found here.

Squirm is goofy, killer worm fun. It’s not to be taken seriously, although it tries to play things as serious as it can. It’s nothing if not an earnest attempt at a horror movie, and that makes it all the funnier for me. If this sounds like your kind of jam, then go ahead and pick up this new disc, as the low budget 70s man-eating worm movie looks much better here than it has any right to. So consider it a conditional recommendation for lovers of the weird.