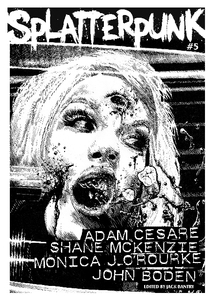 SPLATTERPUNK ZINE Issue #5
£3.50 postage paid in the UK; £5.50 Rest of the World.
http://splatterpunkzine.bigcartel.com/

Because I’m a big fan of one of the contributors, I ordered Issue 5 of Splatterpunk. This issue includes fiction from Adam Cesare, Monica J O’Rourke, Shane McKenzie and John Boden. There is non-fiction from Shane McKenzie, Nathan Robinson, and Jack Bantry, an interview with Head Editor of Deadite Press Jeff Burk and some amazing artwork by Dan Henk, Jim Agpalza, Frank Hall, and Daniele Serra.

Splatterpunk is a printed horror fiction zine edited and produced by Jack Bantry in North Yorkshire. This was my first issue, and it definitely made an impression!

So Bad by Adam Cesare is about a VHS aficionado who finds a ‘mystery’ tape in a pile that he picks up. As he watches, grim images and strange situations become more than just fascinating, and he finds that he might have gotten more than he bargained for.

This Is My Flesh by Monica J O’Rourke is brutal and engrossing, and made me cringe more than once. This is the longest of the stories included in this issue, a grueling exchange between exes, with an ending that surprises.

You Don’t Need Eyes to See Us by Shane McKenzie is like the warnings I always heard growing up about the dangers of messing with a Ouija board. After reading this, I think maybe the warnings were true.

Down By the Ocean by John Boden is by far the shortest tale included, but still my favorite. When something odd washes up on the beach near a small town, maybe the first instinct to go check it out isn’t really the wisest course of action.

All in all I quite enjoyed this issue, and would recommend it to anyone who likes their horror graphic, unapologetic and visceral. Issue #5 can be ordered directly from their site at http://splatterpunkzine.bigcartel.com/