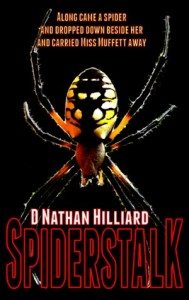 Spiderstalk
by D. Nathan Hilliard
Paperback:  469 pages
Publisher:  Self-published (September 14, 2013)
Reviewed by Matthew Scott Baker
I’ve been sitting here for about 30 minutes, trying to figure out the best way to start this review.  I have so many things I want to say about SPIDERSTALK, but words cannot seem to convey just how amazing this book really is.  And it is truly that:  amazing.  If you are familiar with my reviews, you know this is not a designation I give out very often…maybe only once or twice a year (I read a lot).  But this book is worthy of that mark and so much more.If you are not familiar with SPIDERSTALK, here is the plot synopsis courtesy of the author:

In the past year he has broken up with his fiancee, barely survived a terrible car wreck, and had his brother’s family vanish while he lay unconscious in the hospital. All he has left of them are a frantic call left on his voice mail and a blurry picture of a spider. Since then he has been a crippled shell going through the motions of life with nothing but the search for his brother to keep him going.

But Adam is about to discover that things can still take a turn for the worse. Much worse.

His quest for his lost brother has brushed up against a very dark corner of the world and something has come out of that darkness with an unholy vengeance. He can’t fight it, he can’t hide from it, and not even the police can protect him as his world descends into chaos. His only hope lies in a mysterious pair of strangers who have appeared out of nowhere with an offer of aid. But they have their own agenda, and his survival may not be their top priority. Now Adam must keep his wits about him and learn to believe in himself again as events send him on a collision course with a monster more horrific than he ever dreamed possible.

Where do I even begin?  The above plot synopsis only scratches the surface of what this book is about, but that’s not a bad thing at all.  The story is a treasure trove of plot work and detail.  The result is an astounding book that will blow you away.

As with Hilliard’s previous works, SPIDERSTALK is written well and flows smoothly at a nice pace.  I am once again impressed with the editing as well; many self-published books contain several errors, whether they are grammatical or spelling.  This book only has one editing error that I found (an omitted word).  As a result, the finished product looks and reads like a professional piece.

The story is very unique, a refreshing blast of originality in a medium that is filled with rehashed ideas and reused cliches.  I am not going to give away big aspects of the plot, as discovering what is going on is part of the fun, but I will tell you there is much more going on than you will initially think.  I’m not sure where Hilliard got the idea for this story, but I’d love to know.  Perhaps I will have to schedule an interview with him to find out.

The prologue alone was enough to have me squirming, which is a huge testament to the intensity level this book has throughout.  I would classify this one as part horror, part dark fantasy, part historical fiction…a huge diversity, I know, but read the book and you’ll understand.  I could definitely see this as a major-length motion picture as well.

SPIDERSTALK is my first Must Read recommendation I’m going to give for 2014.  It is a hell of a book, and I cannot wait to see what Hilliard does for a follow-up.  Visit Hilliard’s website or the book’s Amazon page (both links above) for ordering information…either way, make sure to give this one a look.