Actress Piper Laurie (HUD), Lea Thompson (BACK TO THE FUTURE), Barbara Rush (PEYTON PLACE) and producer Walter Mirisch (the PINK PANTHER films) are among guests scheduled to attend The World 3-D Film Expo III, September 6-15, 2013, at the historic Egyptian Theatre in Hollywood. The ten-day festival will pay tribute to the 60th anniversary of what many film historians regard as the “Golden Age” of 3-D. The Opening Night Screening of John Wayne’s only 3-D movie HONDO on Friday, September 6th will feature a Guest Q&A with Wayne’s daughter-in-law, Gretchen Wayne of Batjac Productions, about the restoration of the film.

Saturday, September 7th, begins with legendary producer Walter Mirisch appearing for Q&A and booksigning at his very first film produced, the Gothic chiller THE MAZE at 11:00 AM. Following at 4:30 PM, Stefan Droessler Head of the Munich Film Museum, will present an ultra-rare program & lecture on “European 3-D Cinema 1935 through 1953.” One of the most famous 3-D movies of all time, THE CREATURE FROM THE BLACK LAGOON, screens at 7:15 PM that night with actress Julie Adams in-person for a Q&A and booksigning. The evening ends with a brand-new digital transfer of JAWS 3-D, featuring Q&A with director Joe Alves, cast members Lea Thompson, Louis Gossett Jr. and Bess Armstrong, and location manager Carl Mazzocone.

On Sunday, September 8th, Stefan Droesslerof the Munich Film Museum will return for the Los Angeles Premiere of the 1946 Russian version of ROBINSON CRUSOE (the first-ever 3-D feature produced in the Soviet Union.) That afternoon at 4:45 PM, film historian Elaina Archer
and Rita Hayworth’s nephew, actor Richard Cansino, will appear for Q&A at Hayworth’s only 3-D movie, MISS SADIE THOMPSON, in a new digital transfer. 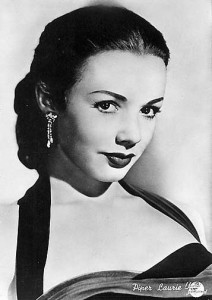 On Tuesday night, September 10th at 7:00 PM, lead actress Kathleen Hughes will appear for Q&A at director Jack Arnold’s rarely-screened Film Noir, THE GLASS WEB. Following at 9:45 PM, actress Piper Laurie will do a Q&A and booksigning with the Western Noir, DANGEROUS MISSION.

The final day of the 3-D Expo, September 15th, wraps up with a screening of Dean Martin & Jerry Lewis’s only 3-D movie, the comedy MONEY FROM HOME, with lead actress Pat Crowley in-person for Q&A. The final show of the Expo, the rarely-screened Korean War drama CEASE FIRE (filmed in actual battle zones during the war) screens at 9:45 PM that night, hosted by military historian/conservative commentator Resa “WARCHICK” Kirkland.

Paying tribute to what many film historians regard as the “Golden Age” of 3-D on its 60th anniversary, The World 3-D Film Expo III will dazzle on the big screen at the Egyptian Theatre (6712 Hollywood Boulevard, Los Angeles, CA 90028) with “Excitement that can almost touch you!” from
September 6-15, 2013. The ten-day festival will include 35 screenings of classics, restorations, premieres and rarities in a combination of 35mm 3-D projection and state-of-the-art RealD 3-D. Most programs being presented at the festival will be shown in archival double-system 35 mm. prints, many of them the last known copies.

The festival is produced by Sabucat Productions and is not a program of the American Cinematheque. Complete film schedule. 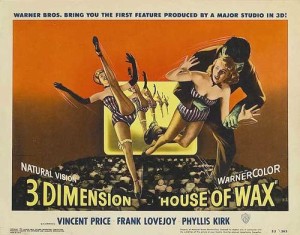 Sadly, several of the 3-D features and shorts screened at the previous Expos (2003 and 2006) are no longer available – yet another reason that Expo III is a once-in-a-lifetime event, because for many of the movies showing here, you literally will not see them projected this way again. For the hardcore film-buffs, another reason not to miss the Expo is that we’ll be showing all of the features and shorts in their correct aspect ratio (many in widescreen); for the most part, these 3-D films have not been seen in their director-intended widescreen versions since their original theatrical play-dates nearly 60 years ago!

It’s been 60 years since 3-D literally leapt off American movie screens with films like CREATURE FROM THE BLACK LAGOON, KISS ME KATE, DIAL M FOR MURDER and IT CAME FROM OUTER SPACE. Now, over half a century later, 3-D is back in the mainstream with a vengeance … and so is the World 3-D Film Expo!

Debate still rages over whether 3-D is a novelty, a gimmick, a passing fad (funny enough, they said the same thing in the early Fifties about another fad called “rock ‘n roll” …) 3-D today may be technically different than the dual-35mm projector system of the early days – but whether you’re watching James Cameron’s AVATAR or Andre de Toth’s spine-tingling HOUSE OF WAX, there’s that same sense of childlike wonder and pure gonzo fun at watching images float/bounce/stab off the screen straight at you. There’s no denying it: 3-D is Cool.

3-D technology has changed significantly since the first Expo at the Egyptian in 2003 – and in keeping with the times, we’re thrilled to partner with RealD in presenting digital 3-D screenings the first weekend of a number of previously-unavailable movies, kicking off with a special 60th Anniversary screening of the John Wayne western HONDO, followed by such treasures as a 1946 Russian adaptation of ROBINSON CRUSOE (making its Los Angeles premiere) and a fascinating program of “European 3-D Cinema from 1935-1953” (Stefan Droessler, 3-D historian and head of the Munich Film Museum, will present an in-depth overview of “European 3-D Filmmaking 1935-1953,” including long-lost footage from the 1936 Berlin Olympics.). And yes – we’re finally showing the nuttiest 1980’s 3-D movie of all, JAWS 3-D in a new digital transfer! (It’s worth noting that all of the above programs are only available in digital 3-D now – another reason to embrace the new technology.) 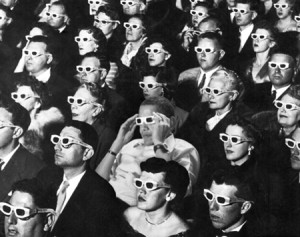 But for fans of classic 35mm double-system projection, never fear: we’re screening an incredible bonanza of one-of-a-kind prints of classics like KISS ME KATE, HOUSE OF WAX, REVENGE OF THE CREATURE and IT CAME FROM OUTER SPACE, all in their original dual-interlocked projector format with a silver screen and polarized glasses – alongside gems like the World 3-D Premieres of the Korean War drama DRAGONFLY SQUADRON (one of the last unseen 3-D features from the classic Fifties era) and the long-lost short “COLLEGE CAPERS” (restored from the only surviving print in existence.) And let’s be honest: 3-D was never meant for a Chekov play, it was always best at pure genre filmmaking – and whether your taste is Gothic Horror (THE MAD MAGICIAN, THE MAZE), Film Noir (I THE JURY, INFERNO), Musicals (THE FRENCH LINE, THOSE REDHEADS FROM SEATTLE) or “What on Earth is That??!” (the indescribably deranged ROBOT MONSTER and GORILLA AT LARGE) – it’s here at the 3-D Expo.

The World 3-D Expo has been called “a Woodstock for movie geeks” by film critic Leonard Maltin. Organized by Jeff Joseph of SabuCat Productions, the Expo was first presented at the Egyptian Theatre to sold-out crowds in 2003 and again in 2006. “The technical demands of presenting 3-D cinema and the increasing difficulty of finding prints means that for many of the films presented, this may be the last time they are ever screened in this format” says producer and programmer Jeff Joseph.

Tickets:
Tickets for the festival are available on the Expo website at:
www.3-dfilmexpo.com or by calling the Expo Box Office at (661) 724-0934. Individual tickets are $18 per show; an Expo Pass for all 35 programs is available at $399 including priority seating.