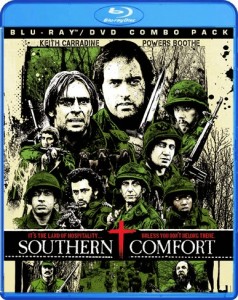 It’s time for a genre break. That’s when I take a step back from the fright flicks and take a look at a movie that I think everyone, including horror fans, should enjoy, even if it’s not a horror movie. After all, man (and woman) cannot live of scary movies alone, or at least, they shouldn’t. So today we’re going down to the bayou for a bit of Southern Comfort from 1981 and director Walter Hill. Bring your waders, and for God sake some ammo, things are gonna get rough.

Back in the early 80s, Walter Hill was the man for action flicks, and he could do no wrong in my eyes. The Warriors, The Long Riders, 48 Hours, and this one were the macho movies I grew up on, full of men doing manly things, usually in the face of overwhelming odds. This movie, Walter Hill’s metaphorical take on the Vietnam War, has a group of Louisiana National Guard men going on maneuvers deep in the swamps. They’re a cocky, joking bunch of weekend warriors playing at soldier with blanks in their guns and no respect for the alien world they’re about to enter. Surprise, surprise, they soon find themselves in way over their heads. Through a mix of arrogance and stupidity, they piss off the locals to such an extent that the ragin Cajuns that call the unforgiving bayou their home, decide to hunt them down and kill them to the last man. Now that is the nickel tour of the plot behind this movie, but like so many good things, there’s more to it than that.

A lot of people see similarities between this film and Deliverance, and I can see that, but I think there’s far more to Southern Comfort than that. The cast of characters here is larger, and they are far less sympatric. While poor Ned Beatty did nothing to deserve what happened to him, these part time soldiers are far less innocent. Largely a bunch of fools with guns, they mess with the wrong group of locals and end up paying the price. Even after their initial mistake of stealing some backwoods trappers’ boats, and then shooting at them with blanks for fun, members of their group continue to go out of their way to escalate that situation through a mixture of fear, insanity, stupidity, and downright meanness. The fact that the guardsmen are so obviously out of their depth and ill prepared to deal with the rarely seen, but continuously feared indigenous population that know their home ground so much better than the inept intruders, is the final neon sign that this movie is about a lot more than what it appears to be at first.

In addition to a well-crafted subtext, the acting is very good across the board, and Southern Comfort is a who’s who of actors from that era, who all turn in fine performances. Keith Carradine, Powers Boothe, Fred Ward, and Peter Coyote are the standouts on the side of the military, and the face of the Cajun (who naturally speak little or no English, because again; subtext) is represented by perennial bad guy, Brion James, who is both pathetic and menacing here. Add to that Walter Hill’s direction are you have the makings for a first rate movie.

If the fact that this is a very good action/drama isn’t enough of a reason to get you horror hounds to watch it, then let me say that there is some good ultra-violence to be found here. Lots of shootings, some dog mauling, booby trap impalements, and various knifings. Be warned all you lovers of animals, there is some real life hog butchering in here as well. It was done as both a plot point and, more importantly, for a barbeque, so maybe because of that last part it can be excused. Maybe…

What needs no excuse is the new Blu-ray/DVD combo pack from Shout! Factory. Not only does this movie look great in HD, but it comes with a few special features to make you more comfortable with purchasing this movie. Chief among them is a “documentary” (you and I usually call such things featurettes these days) that interviews many of the people who made the movie, and runs about a half hour. A theatrical trailer and a still gallery bring up the rear of extras, so there isn’t an army of goodies to be found here, but for a flick that seems to have been largely forgotten these days, what is here does the movie proud.

Southern Comfort is a great film that still holds up today. When I watched it for review, I showed it to some friends who had never seen it before, and they loved it. One went so far as to drop the cliché of “they don’t make movies like that no more” only he was completely serious. If you are looking for some old school action with a message and great performances, try some Southern Comfort and you might develop a taste for it. Consider it recommended.