Songs of the Satyrs Released by Angelic Knight Press 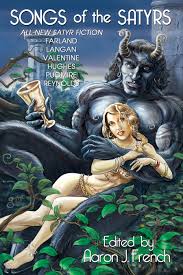 Angelic Knight Press has released Songs of the Satyrs in Kindle and trade paperback.

Satyrs: Pan-like mythological creatures, close companions and worshipers of Dionysus,
who lead bacchanalian lifestyles, drinking wine and cavorting with nymph-like
creatures deep in the woods. These nature spirits have been explored extensively in the
arts throughout history, in both painting and sculpture, as well as from the epic poems
and plays of ancient Greece to the contemporary novels and short stories of the present
day. Now, a rare treat has emerged—an anthology dedicated entirely to these robust
creatures of earthly pleasures—Songs of the Satyrs, edited by Aaron J. French.
Songs of the Satyrs is a collection containing 20 short stories from distinctive new voices
in horror as well as such notable authors as David Farland (a.k.a. David Wolverton;
New York Times best-selling author), Rhys Hughes, Mark Valentine, W. H. Pugmire, and
John Langan, with an introduction by Gene O’Neill.

Greek mythology proves to consistently hold a place of interest for people who enjoy
both light and dark fantasy as the popularity of books such as The Lightning Thief and
movies such as Clash of the Titans and Pan’s Labyrinth have proved.
If there has been a previous fiction anthology devoted to satyrs I’m certainly not
aware of it—in fact the existence of such an anthology seems as unlikely as these
half humans, half goats themselves. But Songs of the Satyrs revels in such
unlikeliness, its authors taking this mythical creature as a challenge to their
imaginations to produce a variety of fantasy, horror, and science fantasy tales
exploring sex, madness, appetite, and ecstasy.