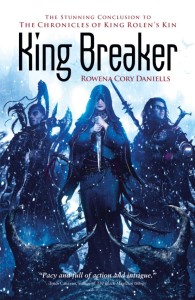 The epic conclusion of the King Rolen’s Kin saga!

The Chronicles of King Rolen’s Kin trilogy remains one of Solaris’ biggest sellers, with Daniells fashioning a world of thrones, of political machinations, and nerve-rending action that fans of George R. R. Martin, Robin Hobb and Gail Z. Martin will enjoy.

Now she brings the story of Byron, Fyn and Piro to a close in a world-shattering conclusion that directly follows from the cliff-hanging ending of The Usurper.

When Cobalt stole the Rolencian throne, Byren, Fyn and Piro were lucky to escape with their lives; now they’ve rallied, and will set out to avenge their parents’ murder. Byren is driven to reclaim the crown, but at what cost? Fyn has sworn to serve Byren’s but his loyalty is tested when he realises he loves Byren’s betrothed. And Piro never wanted to win a throne, but now she holds the fate of a people in her hands.

Rowena Cory Daniells lives in Queensland, Australia, by the bay, with her husband and six children. She has devoted five years to studying the martial arts Tae Kwon Do, Aikido and Laido. She has served on the management committees of two Australian national genre awards, the Queensland Writers Centre, the Brisbane Writers Festival and Fantastic Queensland. Her first trilogy, The Chronicles of Kin Rolen’s Kin, was a bestseller in 2010.