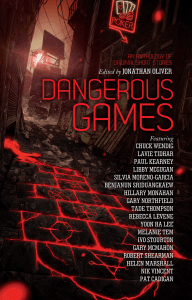 In recent years, no one publisher has done as much for the short form of speculative fiction in Britain as Solaris. – tor.com

In a world ruled by chance, one rash decision could bring down the house, one roll of the dice could bring untold wealth, or the end of everything. The players have gathered around the table, each to tell their story—often dark, always compelling. Within you will find tales of the players and the played, lives governed by games deadly, weird, or downright bizarre. In this anthology of the weird and the macabre, multi-award-winning editor Jonathan Oliver brings together a diverse collection of voices from some of today’s finest writers, to create an original and fresh collection that’s unlike anything you’ve read before. Dangerous Games features new works from Hugo award-winners, brilliant new talents and best-selling authors, including: Chuck Wendig, Silvia Moreno-Garcia, Lavie Tidhar, Benjanun Sriduangkaew, Paul Kearney, Libby McGugan, Yoon Ha Lee, Gary Northfield, Melanie Tem, Hillary Monahan, Tade Thompson, Rebecca Levene, Ivo Stourton, Gary McMahon, Robert Shearman, Nik Vincent, Helen Marshall, and Pat Cadigan. Roll the bones at your own risk December 2014…

Jonathan Oliver is the multi-award winning editor of The End of The Line, Magic, House of Fear, End of the Road and Dangerous Games. He’s also written a couple of novels and a bunch of short stories. He lives in Abingdon with his family and their cat.

Pat Cadigan has won the Locus Award three times, the Arthur C. Clarke Award twice for her novels Synners and Fools, and the Hugo Award for her novelette, ‘The Girl-Thing Who Went Out For Sushi.’ While her novels are all science-fiction, she has also written two nonfiction movie books and several media tie-ins, and her short fiction runs the gamut from lighthearted fantasy to hard-edged horror. A former Kansas City resident, she lives in gritty, urban North London with her husband, the Original Chris Fowler.

Mexican by birth, Canadian by inclination, Silvia Moreno-Garcia lives in beautiful British Columbia with her family and two cats. Her speculative fiction has been collected in This Strange Way of Dying. Her debut novel, Signal to Noise, about magic, music and Mexico City, will be released in the spring of 2015. She tweets @silviamg and blogs at silviamoreno-garcia.com

Paul Kearney was born in Northern Ireland in 1967. He studied Anglo-Saxon, Middle English and Old Norse at Oxford University, and has been an English teacher, a bartender, and an Army Officer. His first novel was published in 1992, and he has been writing professionally ever since. He lived for several years in the United States, and in Denmark, but at present he and his wife make their home in a croft beside the beach in County Down.

Yoon Ha Lee’s collection Conservation of Shadows came out from Prime Books in 2013. Her short fiction has appeared in Tor.com, The Magazine of Fantasy and Science Fiction, Clarkesworld, and Lightspeed. She lives in Louisiana with her family and has not yet been eaten by gators.

Rebecca Levene has been a writer and editor for twenty years, working in the games, publishing, TV and magazine industries. Her new four-part epic fantasy series, The Hollow Gods, launched in July 2014 with Smiler’s Fair.

Helen Marshall is an award-winning Canadian author, editor, and doctor of medieval studies. Her debut collection of short stories, Hair Side, Flesh Side (ChiZine Publications, 2012), was named one of the top ten books of 2012 by January Magazine. It won the 2013 British Fantasy Award for Best Newcomer and was shortlisted for a 2013 Aurora Award by the Canadian Society of Science Fiction and Fantasy. Her second collection, Gifts for the One Who Comes After, will be released in the autumn of 2014. She lives in Oxford, England where she spends most of her time staring at old books.

Libby McGugan’s first novel, The Eidolon, has been nominated for the 2014 British Fantasy Best Newcomer Award. She recently emerged from a writing cave in Glasgow with the second book in the Quantum Ghosts series, The Fifth Force, for some fiddle playing and emergency medicine work. The Sugar Pill, another medical-based short story, was published in the serial fiction magazine Aethernet.

Gary McMahon is the acclaimed author of nine novels and several short story collections. His latest releases are the novels The Bones of You and The End, and a short story collection titled Where you Live. His short fiction has been reprinted in various ‘Year’s Best’ volumes. Gary lives with his family in Yorkshire, where he trains in Shotokan karate and likes running in the rain. You can find Gary at www.garymcmahon.com

At night, when the lights are dim and the creepy crawlies scuttle through the shadows, Hillary Monahan throws words at a computer. Sometimes they’re even good words. A denizen of Massachusetts, she’s most often found locked in a dark room killing internet zombies or corralling basset hounds. Mary: The Summoning, her YA horror novel about four girls who summon Bloody Mary, was published by Disney-Hyperion Fall of 2014.

Gary Northfield has written and drawn mad, jolly comics for kids for over 10 years now. Including Derek The Sheep for the Beano, Max The Mouse for National Geographic Kids, Little Cutie for The DFC and Gary’s Garden for The Phoenix. He has a book out called Terrible Tales of the Teenytinysaurs from Walker Books (2013), and his comic strips Derek the Sheep (2008) and Gary’s Garden (2014) have been collected into books with Bloomsbury and David Fickling Books respectively. His new fiction book series, Julius Zebra, will be out 2015 from Walker and Candlewick Press.

Benjanun Sriduangkaew writes fantasy mythic and contemporary, science fiction space operatic and military, and has a strong appreciation for beautiful bugs. Her short fiction can be found in Tor.com, Clarkesworld, Beneath Ceaseless Skies, Solaris Rising 3, various Mammoth Books and best of the year collections. She is a finalist for the Campbell Award for Best New Writer.

Ivo Stourton is a writer and lawyer. He has published two previous novels with Random House, The Night Climbers and The Book Lover’s Tale and one science fiction novel with Solaris, The Happier Dead. He lives with his wife in London.

Robert Shearman is probably best known for writing that episode that brought the Daleks back to the revived series of Doctor Who, but he started out as a theatre and radio dramatist, writing strange comedy plays for the likes of Alan Ayckbourn, about people falling in love with their younger selves, or imaginary friends magically coming to life; his two series of the interactive BBC radio series Chain Gang both won Sony Awards, with a third series due in 2013. He has written three collections of short stories, Tiny Deaths, Love Songs for the Shy and Cynical, and Everyone’s Just So So Special, and collectively they have won the World Fantasy Award, the British Fantasy Award, the Shirley Jackson Award and the Edge Hill Short Story Readers Prize; individual stories have been selected by the National Library of Singapore for the Read! Singapore campaign, and nominated for the Sunday Times EFG Private Bank Award. A fourth collection, the horror-themed Remember Why You Fear Me, is published by Chizine.

Melanie Tem’s work has received the Bram Stoker, international Horror Guild, British Fantasy, and World Fantasy Awards and a nomination for the Shirley Jackson Award. She has published numerous short stories, eleven solo novels, two collaborative novels with Nancy Holder, and two collaborative novels and a short story collection with her husband Steve Rasnic Tem. She is also a published poet, an oral storyteller, and a playwright. Solo stories have recently appeared in Asimov’s Science Fiction Magazine, Crimewave, and Interzone, and anthologies such as Black Wings and Darke Fantastique. The Tems live in Denver, CO, where Melanie is executive director of a non-profit independent-living organization. They have four children and five grandchildren.

Tade Thompson’s roots are in Western Nigeria and South London. His professional background is psychiatry with interests in anthropology. His short stories have been published in small press, webzines and anthologies. Most recently, his story ‘The Madwoman of Igbobi College’ appeared in Interfictions Online. He lives and works in South England and has been known to haunt coffee shops, jazz bars, bookshops, and libraries. He is an occasional visual artist and tortures his family with his attempts to play the guitar. His novel Making Wolf will be published by Rosarium in 2015. He releases random tweets at @tadethompson and blogs at tadethompson.wordpress.com

Lavie Tidhar is the author of A Man Lies Dreaming, The Violent Century and the World Fantasy Award winning Osama. His other works include the Bookman Histories trilogy, several novellas, two collections and a forthcoming comics mini-series, Adler. He currently lives in London.

Nik Vincent began working as a freelance editor, but has published work in a number of mediums including advertising, training manuals, comics and short stories. She has worked as a ghost writer, and regularly collaborates with her partner, Dan Abnett. Nik was educated at Stirling University, and lives and works in Kent. Her blog and website can be found at www.nicolavincent-abnett.com and she tweets @N_VincentAbnett.

Chuck Wendig is a novelist, screenwriter and game designer. He’s the author of many published novels, including but not limited to: Blackbirds, The Blue Blazes, and the YA Heartland series. He is co-writer of the short film Pandemic, the feature film HiM, and the Emmy-nominated digital narrative Collapsus. Wendig has contributed over two million words to the game industry. He is also well known for his profane-yet-practical advice to writers, which he dispenses at his blog, terribleminds.com, and through several popular e-books, including The Kick-Ass Writer, published by Writers Digest. He currently lives in the forests of Pennsyltucky with wife, tiny human, and two dogs.