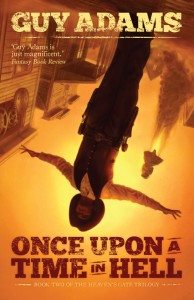 Once Upon A Time in Hell

Saddle up! It’s Steampunk SF in the Wild West!

“Supernatural cowboys and steampunk Indians… saddle up for an enjoyable ride.”

Guy Adams returns to his incredible Steampunk Wild West world with the sequel to The Good The Bad And The Infernal!

One day every hundred years, a town appears, its location and character different every time. The town’s name is Wormwood and it is a gateway to heaven itself. Wormwood has appeared, and with it a doorway to the afterlife. But what use is a door if you can’t step through it?

Hundreds have battled unimaginable odds to reach this place, including the blind shooter Henry Jones; the drunk and liar Roderick Quartershaft; that most holy, yet enigmatic of orders, the Brotherhood of Ruth; the inventor Lord Forset and his daughter Elisabeth; the fragile messiah Soldier Joe and his nurse Hope Lane. Of them all, Elwyn Wallace, a young man who only wanted to travel west for a job, would have happily forgone the experience. But he finds himself abroad in Hell, a nameless, aged gunslinger by his side. He had thought nothing could match the terror of his journey thus far, but time will prove him wrong.

On the road to Hell, good intentions don’t mean a damn… 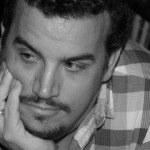 Guy Adams is a no-good, pen-toting son of a bitch. Responsible for over twenty penny-dreadfuls and scientific romances such as The World House and the Deadbeat series. He has also worked with the Hammer Books Gang creating novelisations of their foul kinematographs and has been known to operate under the alias of John Watson M.D. writing novels featuring that pansy-ass detective Sherlock Holmes. He is wanted in several states and a reward is offered for anyone quick enough to slip a noose around his crooked neck. Further evidence of his crimes can be found on his Wild Western Waystation: www.guyadamsauthor.com