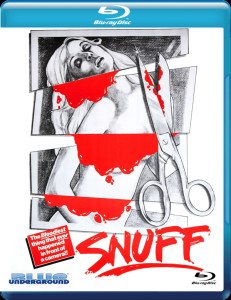 It’s good to see Blue Underground back to releasing some new cult classics. That is, old fan favorites, new to Blu-ray. For a while they seemed to be hibernating a little, and that’s a shame as they are one of my favorite Blu-ray/DVD companies and have brought out some of my all-time favorites discs. That being said, Snuff is not one of my favorite films. I actually think it’s a tedious chore to sit through with a very unsatisfactory payoff at the end. That said, this movie has historical horror street cred up the wazoo. For that alone it’s worth a watch for the most serious of horrorheads, but is it worth a buy?

Well let’s start with the history lesson. When this exploitation flick first came out there was a bit of an uproar that this was, in fact, a real murder caught on film. Even the FBI had to investigate things to make sure no crimes were committed. Now as soon as anyone watched the rather amateurish gore effects used to simulate the titular snuff, it was pretty clear that it was fake. Then it was discovered that the whole controversy about it being a “real snuff movie” was made up by the filmmakers to drum up interest in their movie. A trick that would be pulled again, to greater effect, when The Blair Witch Project came out.

So that’s the interesting history bit. Sadly, the actual movie is nowhere near as interesting. It’s about a Manson-like cult in South America (“where life is cheap” according to the movie’s tagline) trying to breed the most perfect child for sacrifice. If that sounds remotely interesting, trust me it’s not. There are long stretches of nnnooottthhhiiinnnggg going on here, other than horrible inept dubbing of the Argentinian cast into English. There are a few deaths, but they are so tame and uneventful that gorehounds will be foaming at the mouth with anger and everyone else will just be put to sleep.

Here is some more mildly interesting history for you. All that above was actually made for a different movie originally called Slaughter. And it’s a bad, bad, bad, bad film. So much so that when it was purchased by a US exploitation distributor, he knew he had to doctor up that turd if it was ever going to turn a profit on it. So he cut out the credits to give it that real, raw look, then he filmed a five minute end scene in a crappy bedroom set where the reportedly lead actress from the previous movie (I say reportedly, because it’s actually an entirely different person) is tortured and murdered “for real” in front of the camera. The canny distributor then renamed it Snuff, spread some rumors about it being a real murder movie, and the rest is cinematic history. And honestly, that’s all there is to this movie. It’s a neat bit of marketing to trick sick people who wanted to see a real murder into watching a boring, drawn out, horribly made movie with a cheap shock of an ending. Yay.

Because this Blu-ray is from Blue Underground, at least this bad movie looks very good. It’s still a little grimy in places to keep that “real snuff movie” look, but the picture is clear and the amount of detail you can see is impressive. It also comes with some neat extras. There are three interviews that all together run about 30 minutes. The first is with Carter Stevens, someone who was there when they filmed the new ending that turned Slaughter into Snuff. Another interview is with Nicolas Winding Refn, the writer/director of the very decent Ryan Gosling movie Drive. Mr. Refn, had nothing to do with Snuff, but he is fan of the film and he also provides a short intro to the movie. Lastly there is an interview with a retired FBI agent named Bill Kelly who investigated stories of real snuff films, including this Snuff film. Image galleries and trailers bring the extras to an end.

Snuff is not a good movie, but because of the controversy it caused back in the 1970s, it is an interesting historical artifact, if nothing else. If you are a diehard horror collector then you might want to pick up this new Blu-ray of Snuff just so you can say that you have this movie in your library. For everyone else, I have to say give this one a pass.