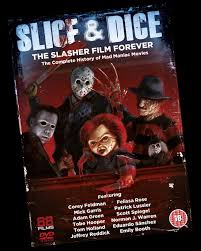 From across the pond comes a UK look at a very American genre: slasher films. And by American, I mean North American, as nearly as many slasher flicks were made by Canadians as were filmed in the good old U.S. of A. Now I love, love, love slasher films. I’m a child of the 80s and I grew up watching them. In fact, the first horror movie I’d ever seen, other than 30s and 50s monster movies on the Saturday afternoon creature feature TV show, was a slasher movie. Friday the 13th part 4: The Final Chapter for those wondering. So I am a huge mark for these kind of flicks, and I love most of the horror movie documentaries that have come out over the last few years. So would this new import like a finely tuned Jaguar? Or would this be something from far away that’s just not to my taste, like spotted dick? Well grab your machete, your white William Shatner mask, and let’s find out.

First some really good news, while this new double DVD set is from a UK company, 88 Films, it is region free, so no matter where you live, you can watch it. But should you? Well yeah, I guess so, but if that doesn’t sound like a rousing recommendation, that’s because it’s not. Now don’t get me wrong, Slice & Dice isn’t a bad documentary but it does have two strikes against it. First, it is rather on the short side, being only one hour and fifteen minutes long. For a documentary on something as vast as slasher movies (in both historical length and the breadth of films made) that means individual movies here get covered only very briefly, if at all. And that leads to the second strike against Slice & Dice: it’s very thin on content. While it covers most of the “big boys” of the slasher world, even they get only a handful of minutes devoted to them, and some of the lesser known films hardly get a nod at all, despite some of them being fan favorites.

Now a possible third strike was narrowly avoided by a bunt, and that’s in regards with who this documentary chose to focus on when it came to the all-important interviews, and who was noticeably absent. Now I’m not going to ding them too hard on who they didn’t get, as sometimes schedules clash and people just don’t want to be interviewed, but I do have to wonder why Corey Feldman is not only given top billing, but treated as some sort of expert in the field. Correct me if I’m wrong, but he was in one (and yes, maybe 3 minutes of its sequel) slasher flick. And while it was my aforementioned (and much loved) Friday the 13th part 4, that hardly makes him someone that should get so much screen time in a documentary about slasher films. While Corey was the most head-scratching inclusion in this film, he wasn’t alone.

So I’m betting that right about now you’re thinking that I hated this movie, but really I didn’t. I wish it could have been more, both longer and more in-depth, but it’s not bad and I did have fun watching it. It’s only that if you are a slasher fan, like the kind of person who would buy a documentary on slasher films, then you will get nothing new from this. Not one little bit. This whole movie has a very light and fluffy feel to it. Does that make it bad? No, chocolate mousse is light and fluffy and I love that, but it’s not what you would call filling.

Still, it is fun for the slasher film fanatic like me to play “name the flick” as the various scenes splash onto the screen, and there are some fan favorites that get interviewed here like Tobe Hooper and Felissa Rose. While it does skip over a few films, and it’s coverage on all of them is slight, it is largely inclusive starting with what many (myself included) think is the granddaddy of the slasher, Psycho, and running up to the most recent of remakes. The doc is also broken up into subjects like how to survive a slasher film, what makes a memorable slasher villain, and the final girl. Again, if you’re a fan of the genre, all this is old news, but if you’re a relative newcomer to the world of masked maniacs, you might get more out of this.

As for the extras on this two disc DVD set from 88 Films, there are some worth dying for. There is an informative audio commentary with director Calum Waddell and British author and slasher movie enthusiast Justin Kerswell. Calum and Justin also team up to cover all the trailers in the “Trailer Park of Slasher Movies” where 22 slasher movie trailers have been collected for your viewing pleasure. There are a bunch of extra and extended interviews with many of the people featured in the documentary. There is a Q & A session from the Glasgow Film Theater, footage from the movie’s premiere, and a music video by some group called The Acid Fascists (never heard of them) for the doc’s theme song called “All Kinds of Twisted.”

Perhaps the best extra is a second documentary called Don’t Go In The Backwoods that’s all about, you guessed it, horror movies taking place in rural settings. Running 37 minutes and with most of the same talking heads from the main Slice & Dice doc, this is basically a segment that was meant to be part of that documentary but was cut for some reason. Why? I have no idea. As I said before, the “official” documentary isn’t exactly long at just 75 minutes. Whatever the case, it’s good that it’s added here as it does cover some movies that are otherwise overlooked in the main doc, such as The Hills Have Eyes, Last House on the Left, Deliverance, The Texas Chainsaw Massacre, 2000 Maniacs and many more.

Slice & Dice is a decent documentary, but it is far from earth shattering. It seems to be made more for newcomers to the slasher universe than the fans as it lacks insider information that we all want. It covers all (well most) of the bases, even if it does so briefly, and the Don’t go In The Backwoods extra goes a long way to adding to that. Is this the must have doc for fans of cinematic killers? No, but it is a fun and fast ride, so for that it does manage to carve out a recommendation from me.