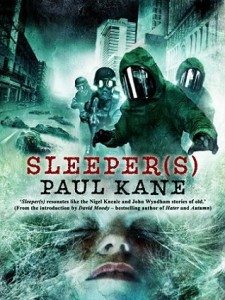 Paul Kane is a British author who has – by slow degrees – come to my attention through social media. Although not privy to reading his fiction before this, I was aware had Paul entered the collective tribe with numerous publications orbiting the Hellraiser mythos – in particular the well-received Hellbound Hearts anthology released in 2009 (of which Paul was a creative and driving force). Not only prolific in publishing circles, he seems to be an overall advocate for British horror across the globe. With Sleeper(s), Paul teams up with the burgeoning South African small press Crystal Lake Publishing to give us a short, cinematic novel heavily influenced by the epidemic sub-genre whose peak came with techno-thrillers such as The Andromeda Strain.

Middletown UK, and an entire populace has been rendered unconscious by an enigmatic ‘sleeping’ disease that’s reminiscent of a plague. Consequently quarantined in the aftermath, the military enlists the help of Dr. Andrew Strauss … an eccentric insomniac and a pioneer in the study of infectious diseases. Now a freelance maverick, Andrew travels the world with a (doting) assistant ready to tackle the next contagion. Though separated by a recent romantic tryst, both he and his partner are recalled as cavalry to the ghost town of Middletown, there to confront a virus that appears almost supernatural in origin. Accompanying the scientists are a motley crew of British and US soldiers – both of whom serve under different motives and clash in a melee of culture and warring personalities.

Paul has created an ominous world around Middletown. Choosing what is almost a ‘slant’ on the saturated zombie genre – much as Stephen King did with Cell – the infected humanity here are refreshing and unpredictable creatures. Dormant to the environment and cocooned in a kind of white webbing secreted from their bodies, each ‘Sleeper’ appears to share a collective hive mind on a dreaming frequency that can also be accessed by the living. Shuffling around with malevolent intent, there is an old school flavour to these living dead that harkens back to tales prevalent in the past – where characters and their motivations come in black and white … and the view through one’s imagination contains the same tone and imagery.

However, part of the problem of drawing upon a bygone era is simply having a landscape that is overly too familiar. Earlier, I sighted The Andromeda Strain as an obvious inspiration … but a reader here will also see shades of several X Files episodes and plot devices lifted directly from movies such as Inception and Outbreak. Although one could argue Mr. Kane has delved into this territory as a kind of homage to those groundbreaking genre tales, the characters in this book seem to bear no relation to living persons, and have instead been lifted as cardboard cut-outs from those celluloid adaptations. There is a strong romantic element here (the relationship between Strauss and his assistant), but their dialogue and private musings are sometimes rendered on the page like corny Hollywood discourse. When the climax comes – largely involving a confusing military cast – the scenes have a choppy, incoherent momentum that was evocative of the police-force/vigilante action sequences in Clive Barker’s Nightbreed. (Original studio version). If I had one grievance with the overall syntax and ‘voice’ it would be a writing style slightly impoverished by a lack of metaphor.

That said, for readers who love the cross-pollination of science fiction and horror – and like it told in a gritty action style with military nuance – there is still a lot to like within these pages. Compact of length and cinematic in scope, Sleeper (s) contains just enough punch for this reviewer to seek out the further works of Paul Kane.