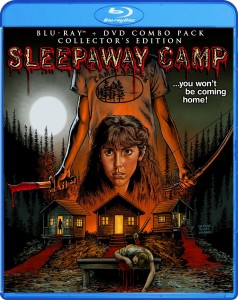 In the pantheon of classic 80s slashers, there are some movies that stand severed head and bloody shoulders over the rest. Sleepaway Camp is one such movie, and not only for its shocking ending. Yes, that ending is so out there that no one who saw it has ever forgotten it. Even if they don’t remember anything else from this low budget, 1983 fright flick, they will remember its ending. That said, I think this movie is more than an amazingly memorable final scene. Sure it’s a basic bit of stalk and slash, but follows that formula far better than most. And thankfully now, at long last, this film is getting some of the respect it deserves with a new Blu-ray/DVD combo release. So grab your sunscreen, hunting knife, bee repellent, and curling iron, we’re heading off to Sleepaway Camp.

Like many 80s slashers, this movie is set in a summer camp. Unlike many other camp-set slashers, including the granddaddy of them all, Friday the 13th, this movie actually has age appropriate kids in it. That’s something that not only makes it more real, but also at times, more icky feeling. After a bit of family tragedy in the movie’s prologue, two such kids are off to Camp Arawak. There’s the hip and foulmouthed Ricky, and his painfully shy cousin, Angela. And poor little Angela, who plays the deer in the headlights thing to the hilt, is completely unprepared for the bullies and pedophiles (no, really) that populate this camp. Luckily for her, she has a murderous avenging angel that punishes anyone that messes with the mute, big-eyed girl.

And what punishments they are! You see, in slasher movies, a good kill is like the punchline to a good joke. They are what really sell the movie for most fans. They are the most memorable bits and the payoff those watching the film are waiting for. While some stalk and slash movies never got that and delivered only boring kills to their snoozing audience, Sleepaway Camp always delivers the goods. From a grotesque boiling alive, to a somewhat comical death by bees while locked in the toilet, to a scene involving a hot curling iron that even makes the manliest men in the audience wince, this movie doesn’t disappoint in the kill department.

In addition to the gore gags, this movie has a neat little mystery as to who is doing the killing and why, not to mention some laugh out loud bits, be they intentional or otherwise. Combine that with some mostly surprisingly good acting from such a young cast, a great horror movie score by Edward Bilous, and more than able direction by Robert Hiltzik, and you have a prime example of 80s slasherdom.

Now we come to the part where I discuss the extras and special features on this new Blu-ray/DVD combo pack from Scream Factory, but before that, let me say first and foremost that this movie looks amazing in HD. This film has never looked this good. Even the horrible electrical-tape-looking mustache on the cop at the end looks good. Okay, no that doesn’t, but good on you if you got that reference. Now we can get to the goodies, and in typical Scream Factory fashion, this disc is loaded with them. There are three, yes THREE audio commentaries found here. One is with actors and cinema siblings Felissa Rose and Jonathan Tiersten. Another is with writer/director Robert Hiltzik. The third is with Felissa Rose and Robert Hiltzik. There is a meaty retrospective doc called “At the Waterfront After the Social” that runs 45 minutes. There is a short film called “Judy” staring the original teen bitch, Karen Fields, that’s…well pretty damn bad. But hey, at least it’s on here just in case you want to see it for some reason. There is a music video by Jonathan Tiersten. There is a 10 minute slideshow of candid pictures taken from the original set of the film. This if followed by another, shorter slideshow of illustrations by make-up effects artists Ed French. There’s even a short special on the new 2K film upgrade process that Sleepaway Camp underwent for this Blu-ray. Some trailers and TV spots bring this impressing camp of extras to a close.

Sleepaway Camp is a bona fied slasher classic for more reasons than just it’s shocking, can’t ever unsee it, ending. If you are a fan of the maniacs with knives flicks, then this new Blu-ray from Scream Factory is a must have. The 2K upgrade makes the film look amazing and there are a ton of great extras on the disc. Consider it highly recommended.