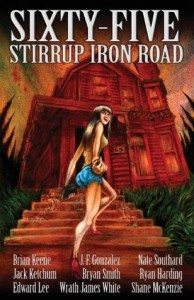 What do you get when you enlist the talents of horror legends Brain Keene, Jack Ketchum and Edward Lee with noted horror scribes Bryan Smith, J.F. Gonzalez, Wrath James White, Nate Southard, Ryan Harding and Shane McKenzie? I was hoping for a twisted, macabre rollercoaster ride, but instead found a dark, sometimes gripping, but often convoluted story featuring nonsensical characters whose motivations and personas change with the chapters (and authors). Plus, it was really, really gross.

But before we get into the dirty, graphic and slightly spoilery details, know that I am not a prude. I enjoy horror that pushes boundaries and makes the reader feel uncomfortable. Death, dismemberment, perverse sexual acts, excessive gore, depravity, whatever is all fine. But much of Sixty Five Stirrup Iron Road is just sick, and no, that’s not a compliment.

The plot centers around a formally-coy housewife, Arianne, who becomes so constantly aroused she masturbates all over the house in her husband’s absence, and can’t keep her hands off him when he’s home. But as her desires increase, so do new perversions, and choking, golden showers, a repeated fixation on chunky vomit and more ensue. When we start talking about extreme bestiality (one scene involves a mouse burrowing in Arianne’s vagina and a dog cumming in her mouth) and necrophilia (a Vietnam vet describes what it was like to partake in a gang rape of a girl’s severed torso and head), it becomes more nauseating than horrific. That can be a good or bad thing, I suppose, depending what you’re looking for in your horror — just be forewarned. Personally, I found these scenes too sickening to enjoy.

I could look past all that if the plot and characters were coherent, but for the most part, they’re not. Each chapter is written entirely by a single author, or introduces a new one, so one chapter is written by J.F. Gonzalez, the next is written by Gonzalez and Brian Keene, and the next is Keene solo, and so on. But largely the chapters ignore the character development of what came before, making it at best hard to follow or care about what happens to the protagonists, and at worst makes the story nonsensical. It’s as if the writers were each unzipping their literary pants and having a gross-out pissing contest, which, while somewhat entertaining to objectively observe, doesn’t exactly make for an engaging narrative.

For example, Chuck, Arianne’s husband, is presented as a loving partner, who we later find out is a loving partner with a mistress. OK, cool. But then this “loving” hubby disregards what he believes to be his wife’s nuthouse-worthy behavior and her literal pleading cries for help because he digs the aforementioned uptick in his sex life and doesn’t want it to change. It’s a decision even the most narcissistic character wouldn’t make, and besides being less than admirable, it’s just not consistent. Such flagrant disregard for character development is jarring for the reader, and I found it impossible to care about what happened to Chuck afterward. In fact, it also made me think less Arianne, as the writers obviously weren’t putting a lot of effort into their characters, and she would have to be a damn idiot to be married to such a jackass. And I don’t care very much what happens to idiots, even if the story revolves around them.

But, apparently, I’m not alone, as in a way, the writers quite literally give up on the story. The twist is both brilliant and an admission of guilt, though make no mistake, it’s hilarious and highly entertaining. But it’s not just the twist that deserves praise. Many sections of Sixty Five Stirrup Iron Road are well written and gripping (which is not surprising considering the literary pedigree of the writers involved), and despite the issues I had with it, I still wanted to see how it would all unfold. Which, again, was unequivocally awesome, if only because what came before was not.

So, would I recommend Sixty Five Stirrup Iron Road? Not really. It’s far too gross for its own good, and the characters and plot are too inconsistent to make much of an impact. But, then again, it’s for a good cause (it was written to help pay for writer Tom Piccirilli’s medical bills, and all the proceeds from the book will do so). Plus, it’s a quick, easy – if uncomfortable – read. And if nothing else, you’ll get a good laugh, which in a book as depraved as this one, is definitely the last thing you’ll be expecting.