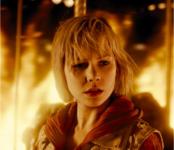 Description: Heather Mason (Adelaide Clemens) and her father (Sean Bean) have been on the run, always one step ahead of dangerous forces that she doesn’t fully understand. Now on the eve of her 18th birthday, plagued by horrific nightmares and the disappearance of her father, Heather discovers she’s not who she thinks she is. The revelation leads her deeper into a demonic world that threatens to trap her forever.

Written and directed by Michael J. Bassett, and produced by Samuel Hadida, Silent Hill: Revelation 3D is based on the survival horror video game Silent Hill 3 and a sequel to the horror film Silent Hill, which is an adaptation of the video game of the same name.