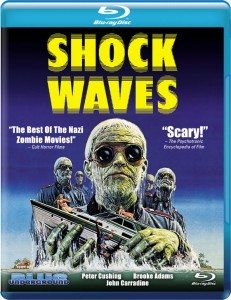 Easily the best underwater Nazi zombie movie ever made. As such, it’s a must have for any serious horror fan’s home library.

What, you need more than that? More than Nazi zombies…underwater! More than Peter Cushing as an old Nazi and John Carradine as an old, salty, ship captain? Man, you just want everything, don’t you? Well okay, since I’m here anyway, I’ll give you the nickel tour of this often forgotten, but always fun and funky flick form 1977. So come on, and don’t forget your water wings. You’re going to need them.

This film sort of begins like Gilligan’s Island did, with a varied group of people chartering a boat for a bit of high seas fun. Of course things don’t go as planned, and soon the castaways are marooned on a tropical island with two notable features. One is a creepy, rusting hulk of a ship nearby, and the other is a once swanky hotel, now gone to seed. The ship we’ll get to, but first our heroes, looking for some help, go to the old building, only to find a very German, and antisocial, Peter Cushing living there all alone. Or is he? He basically tells them that they are all doomed if they stay on the island, and once some of their number start disappearing, he reluctantly coughs up the truth.

Back toward the end of World War II, those kooky Nazis cooked up a scheme for the ultimate underwater commando by using zombies. Yeah, think of the US Navy Seals, only not having to rely on bulky equipment to go underwater, the ability to stay underwater as long as they want, and the added bonus that they’ll never, ever die. Well naturally this Nazi wonder weapon did have one or two bugs, chief among them being that the scuba-zombies were just a tad on the homicidal and uncontrollable side. Peter Cushing was the living commander of these aqua-zombies, and when the war was lost, he was at sea and had no place to go with his deadly cargo. After sailing around for a while, he sank his ship, with all the zombies still on it, and went to live on the nearby island. But now, thanks to a storm, the dead ship of undead death is back, and so too are the killer Nazi zombies.

Now what sets this movie apart from the thousands of other zombie movies out there, not to mention the hundreds of Nazi zombie movies (yes, that really is a subgenre) is both the super soldier aspect, and the underwater setting. First, while these undead soldiers aren’t geniuses, they don’t even ever talk, they hunt, stalk, and kill with military precision. They aren’t your usual groaning, lumbering zombie, they are far more lethal than that. Then there is the underwater thing, and that never gets old here. There are amazing shots of the aqua-zombies walking along the ocean floor, lying in wait in shallow pools to ambush prey, and dragging their victims down to the depths. I can only assume that the filmmakers hired Olympic class divers, as not once can you see bubbles escape the mouths or noses of these soggy undead, and that just adds to the eeriness of the movie. Their bleached-white flash and hair, dark goggles, and Nazi uniforms also help with that too.

On to the extras and goodies on this new Blu-ray from Blue Underground. There is an audio commentary with co-writer/director Ken Wiederhorn, make-up artist Alan Ormsby, and filmmaker and fan, Fred Olen Ray. There are four new interviews here, one with the producer/cinematographer Ruben Trane, one with composer Richard Einhorn, another with actress Brooke Adams, and the last with actor Luke Halpin. All together these interviews run over 50 minutes. A theatrical trailer, TV spot, two radio spots, and a poster and still gallery round out the extras on this disc.

Shock Waves is one of those movies that could only have been made in the 1970s. Okay, the Norwegians came close with their 2009 Dead Snow, but that was played far more for laughs and totally missed out on the underwater stuff. This is a horror movie through and through. It doesn’t nod or wink at you, it plays everything straight to good effect. If you’re a zombie fan and want to try something other than the same old, same old in that genre, Shock Waves is the movies for you. It is well recommended by me.