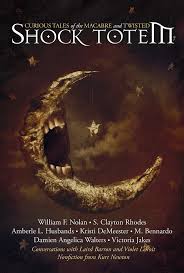 Curious Tales of the Macabre and Twisted

Shock Totem revitalizes the variety format of chiller/esoteric entertainment. Whether you’re familiar with Weird Tales Magazine, Hitchcock, Dark Discoveries or Twilight Zone magazine or relatively new to the market there is truly something for everyone within the pages. Where Totem differs from its predecessors is this hybrid of magazine, anthology and collectible comes formatted in a slick novella format for easy maneuvering, storing and displaying. Chock full of gripping, eerie stories, poetry, novel, movie and music reviews readers are also treated with a glimpse into the minds of the eclectic wordsmiths through interviews and anecdotes all with a predominant theme of the bizarre and unusual.

The contents tend to be tailor made for the discerning horror fan leaning more towards the literary side rather than commercial fiction. On the upside the pages don’t come across as pretentious or condescending. Quite the contrary, the subtle delivery beckons the imagination of the commercial reader and introduces a brand new onslaught of writers they may have had little to no exposure to previously. For fans with a taste of the literary flavour, one and all will be delighted to see their favorite authors return again with something new to tantalize and whet the appetite of our darkest recesses of our minds. There’s little argument that the stories will resonate long after consumption being executed with finesse, nuance and chilling grandiose.

The stories have a haunting edge that will appeal to the everyday audience with a central theme of sustained suffering. As each plot unfolds many of the readers will be grateful for devouring the tales in broad daylight, without pondering the circumstances in the still of night.

Decorated with breathtaking and captivating artwork many consumers will be prompted to display the pages for prolonged admiration.

The articles, reflections and interviews are well crafted, thought provoking and enlightening. Many readers will attain a certain insight into what makes each of the writers tick. I especially enjoy the brief bio of each author. If one particularly fancies their work a list of previous publications are listed for perusal. Another tasty little gem titled Howling Through The Keyhole outlines each story within and the brainchild or inspiration from the author prior to consumption.

Perhaps the true test of any magazine or anthology is for the reader to question if they would pony up their hard earned dollar to read the publication regularly? Suffice to say for my dollar I look forward to further Shock Totem in my future.