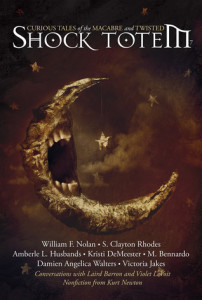 Shock Totem 7: Curious Tales of the Macabre and Twisted

This was by far one of the best choices I could have made to start the year off right by way of dark fiction reading. I imagine that each issue of Shock Totem is as stellar and pristine as this one, and intend to find out. The cover art alone is captivating and surreal…an apropos precursor to what’s inside. Admittedly, I fell in love with each contributor for various reasons.

Amberle Husbands’ “Among the Elephants” was just the kind of spectacular literary gem I expected to find in a collection from such a highly regarded press—yet in truth, it far exceeded my expectations. One of the many things I love about Shock Totem is “Howling Through the Keyhole”, where we are offered glimpses of the inspiration behind each piece. In it, Ms. Husbands confirmed my suspicion that this story was based on real people and events in her life—and makes a strong case for the advice to “write what you know.” The story is strong, beautiful, and emotionally evocative. It also contains my favorite lines from the entire collection…words that disturbed and awakened a place deep in the recesses of my dark literary heart:

“There’s no such thing as Hell,” Sarah croaked one day, straining to be nearer to my ear as I held her medication up to those hard, twisted lips. “We’ve already come through that part…and this world is the reward for whether we performed nobly there…or not.”

“How does one perform nobly in Hell?” I asked her.

“You plant flowers,” she hissed. “You feed the birds, while they’re burning.”

Those were words I will most assuredly not soon forget.

Damien Angelica Walters’ “Shall I Whisper to You of Moonlight, of Sorrow, of Pieces of Us?” won her a spot in Year’s Best Weird Fiction, Volume One, and rightly so. Told in a haunting second person POV, it is the kind of surreal, magical, unearthly tale for which Ms. Walters is known and loved. There is an element of vagueness to this tale, and once again, through the keyhole we learn that even she wasn’t sure where it was going—or how it ended exactly, for that matter. It takes a strong, devoted writer to successfully leave something so integral to the reader’s imagination…and she is undoubtedly one.

M. Bennardo’s “Thing in a Bag” played out like an old black and white episode of The Twilight Zone, which he cites for inspiration among other old school horror classics. The writing is clear, straightforward, direct—and lends itself perfectly to this type of “creature feature” tale. This was actually the last piece in the collection; a nice touch, given the ending.

I’d be lying if I did not say I was completely disarmed by Kristi DeMeester’s “The Long Road”. Her writing was redolent with the kind of experience and clarity you generally only see from more seasoned authors, and spun a tale one might even find reminiscent of something from one of them. Yet her voice does not mimic—she clearly stands on her own literary prowess. “She filled my bedroom with flowers, and underneath the nightmare smells of salt and decay, the Carolina jasmine breathed its perfume into the night air, and slowly, slowly, the nightmares began to recede. The beasts becoming nothing more than shadowy figures, incorporeal wisps compared to Sarah’s sleeping form, her breath warm against my chest. My childhood shrinking against what we called love.” In fact, Ms. DeMeester also secured a place in Year’s Best Weird Fiction, Volume One with another story of hers…one which I am now rather anxious to read.

The only poetry contribution was a striking piece from Dominik Parisien which proves that Wood and the other Shock Totem editors know their way around verse as well as prose. At the risk of sounding repetitive, I once again found myself reading and rereading “Smoking, the Old Sergeant Remembers 30 Mins Past Ceasefire” with Parisien’s “keyhole” insight in mind, and that continues to leave an especially deep chill in my bones. Good poetry will do that regardless, but I genuinely love the inclusion of the sources of inspiration and context for each piece—it’s a very nice touch—and his is no exception. I should also mention that there are nicely framed, low opacity photographs throughout the publication, and the one accompanying this is a close-up of a Roman numeral clock. This adds a thoughtful visual aesthetic to the poem, though Parisien’s words surely do that on their own: “He breathes out/a smoke and fire fox that drags/out his throat twisted shapes burnt onyx black”.

Being a newly converted Totemite, I was also very impressed by the editors’ contributions to the mix. “Bloodstains & Blue Suede Shoes” is an ongoing series dedicated to music (this was Part IV: The Sixties) and includes writing just as strong as the poetry and prose. This co-written installment focuses on the infamous 1969 Rolling Stones concert which erupted in violence and, as John Boden and Simon Marshall-Jones suggest, “was a definitive moment in which the final nail had been driven in the coffin of the 60s…The incident was yet another hemorrhage to the already awakening ideals of peace and love, a crimson smear on the doorway into the next decade.”

In Michael Wehunt’s captivating conversation with Laird Barron, the iconic author reveals the territory he plans to explore in his future writing, and both warns and thrills us with the possibilities…”If not the Children of Old Leech or terrors from the Black Guide, then something worse. There is always something worse.” I’ve yet to run across anyone who does not respect and revere Barron’s work, and any insight he offers is welcome. In regards to his exploration into new literary territories and genres, Barron promises he won’t forsake writing horror or the fans it has earned him: “I’m a morose, morbid guy and the macabre is my friend.” For those of us feeling unease about the current state of the genre, Barron focuses on the quality of the writing he sees in some of today’s best and assures us that “This might be a golden age of darkness.”

Victoria Jakes’ “Consumption” is a hypnotic, quietly shocking piece with a voice that gently lures the reader into the same desperate, conflicted corporeal position as her narrator:

“Sometimes, I imagine myself small enough to crawl under X’s skin, into his stomach cavity. There I would find safety amidst his organs. A benign tumor of love… Sometimes I fantasize about desecrating my body for Y. I slice off my scarred skin. I carve away from my hips and stomach and thighs until I am the right shape and size. I open up my skull and present my mind to him as an offering. I would be raw for him.”

This tale has the most breathtaking of climaxes, and an ending I find myself repeating the last line of from time to time. The whole piece is just so strong and seductive—I simply cannot praise it enough. Truly beautiful…dark fiction at its best.

“Stargazer Breech and Choking”, Violet LeVoit’s interview, left me desperate to read her work. LeVoit is clearly a unique personality in the field—bold, brazen, unconventional—and well-respected as a writer. Her words come across as art; colorful, engaging, and representative of her obvious abundance of talent.

The short fiction contribution from S. Clayton Rhodes seems to be a favorite among readers. Through the keyhole, we learn a great deal about the story behind his story—and, ironically, he quotes mentor and co-contributor William F. Nolan as a source of inspiration by way of three words of writing advice: “Make it compelling.” And he does.

Nolan’s own tale is simply marvelous…short, not so sweet, and crafted with the kind of effortless flair the greats exhibit. And to keep the circle going, he cites Joe Lansdale’s Edge of Dark Water as inspiration for “The Horror that Et My Pap—and Other Swamp Stuff”. To know that legends such as Lansdale and Nolan continue to impress and influence each other—and in turn those of us writing on their heels—makes Barron’s prediction all the more believable.

Kurt Newton tells us a true tale of terror with “The Four Horseman of the Parking Lot”…one we are grateful has the ending it does.

As a huge fan of Boden’s work, his non-fiction article leading off the collection was admittedly the most anticipated piece for me. A portrait of some of the most raw and intimate moments in his life, “The Hook, the Hole, and the Garden” was a beautifully written, gut-wrenching reflection on a loss with which not all of us can relate, but can certainly empathize. Boden has a way of writing which makes it nearly impossible to distinguish between fiction and reality…it is all written with the same enviable blend of intellect, imagination, and somber charm.

To reiterate, this Christmas gift to myself was a worthwhile investment, to say the least. I plan on finding ways to stock my bookcase with the current Shock Totem catalogue…and continue adding to it as they publish some of the leading dark fiction—and non-fiction—in the industry.