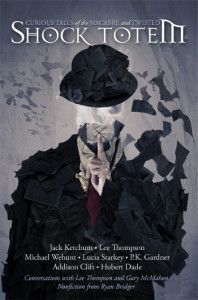 I reviewed Shock Totem #5 when that came out and found the magazine’s sub-title ““curious tales of the macabre and twisted” to be apt.  I said then that Shock Totem was “one of the strongest horror fiction magazines on the market today” and now, having read issue #6, I stand by that assessment.

* The Hard Way: A Conversation with Gary McMahon, by John Boden

* Ballad of the Man with the Shark Tooth Bracelet, by Lucia Starkey

* Strange Goods and Other Oddities (Reviews)

* No One But Us Monsters, by Hubert Dade

* The Cocktail Party, by Addison Clift

* Lighten Up, by Jack Ketchum

* When We Crash Against Reality: A Conversation with Lee Thompson, by K. Allen Wood

* The River, by Lee Thompson

* Howling Through the Keyhole (Author Notes)

Mild plot spoilers for a couple of the stories contained in this issue follow.

There’s too much going on here to go through each item individually, so I’ll just note a few of this issue’s highlights.  As with other issues of Shock Totem, this one contains a mix of first-time or mostly unknown authors and some bigger names.  I like and respect that.  Many readers will be drawn to Jack Ketchum’s story because he’s a big name, but as good as it was, I have to say that I enjoyed some of the other tales in this issue as well if not more than “Lighten Up.”  This issue opens with “For Jack,” a strong entry from first-timer P.K. Gardner meditating on the idea of “soulmates” and the compromises that people have to make in relationships.  Oh, and a really cool serial killer.  I look forward to reading more from Ms. Gardner.  Horror fiction naturally plumbs the depths of the meanings of various fears, but “No One But Us Monsters” by Hubert Dade manages to tell a fascinating story of a man who’s afraid to go down into his dark basement.  I know that premise makes this sound like a very mundane, small story, but it really resonated with me.  This was definitely one of the stand-outs of the collection and was a real testament to Dade’s wordsmithing skill.  I normally shy away from politically infused fiction, but “The Cocktail Party” by Addison Clift was a truly horrifying short piece – seriously, it’s a gutpunch once you realize what’s going on – that explores a very visceral side of the raw abuse of power by political elites.  Clift’s notes on the story imply that his inspiration involved his disgust over abuses of power during a previous administration, but given recent revelations about apparent government abuses of power and trust, this is an extraordinarily timely piece.  I’ve also got to note that Shock Totem continues its tradition of including a substantial author notes section in the back of the issue, which I really appreciate.  I always like to read author’s reflections on their work, and I wish more publications would follow Shock Totem’s lead here.

There were no clunkers in Shock Totem #6.  The stories ranged from good to wonderful.  As with the rest of the magazine’s run, I recommend this latest issue heartily.  This is exactly how a horror fiction journal ought to look.