Sherlock Holmes: The Will of the Dead – Book Review 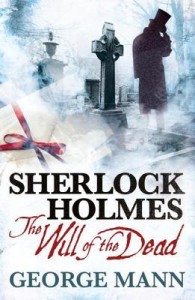 Sherlock Holmes: The Will of the Dead

SHERLOCK HOLMES: THE WILL OF THE DEAD continues Titan Books’ series of new Sherlock Holmes pastiches that are notable for their inclusion of steampunk or other science fictional elements.  George Mann is no stranger to Holmes: he has edited a collection of Holmes stories (ENCOUNTERS OF SHERLOCK HOLMES, also from Titan Books).  Titan will be publishing another of Mann’s Holmes novels (THE SPIRIT BOX) and a second edited collection of stories (FURTHER ENCOUNTERS OF SHERLOCK HOLMES) later in 2014.  His pedigree for Victorian mysteries is strengthened by his authorship of the popular Newbury and Hobbes series (five published so far, beginning with THE AFFINITY BRIDGE, plus another couple short story collections) and his editorial direction of two Sexton Blake collections.  Given all of that, this should be an exciting new Sherlock Holmes novel, but unfortunately, it’s merely good but not great.

The mystery begins simply enough: a wealthy old man dies in a fall down the stairs leaving a handful of nephews and a niece behind.  His will is nowhere to be found.  It all seems ordinary enough, but clearly Sherlock Holmes sees more to the story than the reader does because he immediately agrees to investigate the case.  Here we come to the crux of the problem: the major weakness of the novel is that it is essentially composed of two separate plots that are seemingly unconnected until the very end.  The first plot is what seems to be a simple, run-of-the-mill inheritance dispute after a man dies and his will disappears.  The second plot is a rash of brazen home invasions by a group of “iron men” who smash their way into the homes of the wealthy and carry off valuables occurring at the same time as the inheritance dispute.  We only know about the iron men at all because Watson periodically reads about the latest home invasion in the newspaper and asks Holmes if maybe he might want to help the police with that case.  The reader wonders the same thing.  While obviously fantastical, the case of the iron men certainly sounds more interesting than the dull inheritance mystery.  So why isn’t the book about the second plot instead of the first?  Having read the novel, I just don’t know why Mann chose to virtually ignore the fun and steampunky plot for a very run-of-the-mill one – he has certainly never shied away from the fantastical in his other novels.

Sherlockian purists might also be a little annoyed with the injections of some chapters that are accounts of key events told from the perspective of characters other than Watson or Holmes.  Mann even feels the need to append an apology to the front of the book for this, so while this didn’t bother me, I wonder why he didn’t choose to restructure the narrative to avoid this practice entirely, as these accounts add very little to the story.  Periodic anachronisms of speech are peppered throughout the book, often leading me to think that Mann never did capture the dialogue of Holmes and Watson.  It’s a minor quibble, but it was distracting at times.

I wanted to like this book a great deal more than I did.  Characterization remained shallow throughout, and the dialogue was sometimes just jarring enough that it proved a distraction.  Those weren’t fatal flaws; my only significant criticism was that the book was, for the most part, all too mundane and boring.  Throughout, I often asked myself why Holmes wasn’t interested in getting involved in the iron men case.  Robots seem to be rampaging through the streets of London, and instead of reading about that, we’re left with a plot that pales in comparison with the events we know are occurring off-stage at the same time.  Recommended mainly for those who are big fans of George Mann’s work and those who really crave new pastiches of Sherlock Holmes.