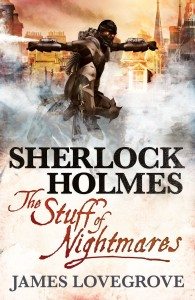 Sherlock Holmes: The Stuff of Nightmares

I’ve been a Sherlockian for a very long time.  Of course the canonical works are great, but I also enjoy the wealth of pastiches that are available.  Some authors have genuinely refreshing takes on the classic characters and tropes (Nicholas Meyer and Laurie King come to mind) while some fall well short of the mark, often by ether rehashing old ground pointlessly or diverging too far from the canonical stories until Watson and Holmes are almost unrecognizable.  Titan Books is publishing (and in some cases, republishing) a line of Holmes novels that include some fantastical elements, this one among them.  I wasn’t sure how I’d like James Lovegrove penning a new Sherlock Holmes tale.  I have nothing against Lovegrove at all – he’s an accomplished and prolific writer – but I know him as a writer of science fiction.  Would he diverge too far from the canon to present an entertaining and recognizable Holmes?  The answer is a resounding no: James Lovegroves’ SHERLOCK HOLMES: THE STUFF OF NIGHTMARES is a very well done and enjoyable read while introducing some delightful SF elements that don’t get in the way of a good story.

The opening premise is a very solid one: London is beset by a series of terrorist bombings that kill dozens of innocents.  Watson himself is nearly killed when Waterloo Station is blown up.  Holmes believes that his old foe Professor Moriarty may be involved in some way, but there’s clearly a wide-reaching nefarious plot at work that threatens the very foundations of the British Empire (and Queen Victoria herself).  Meanwhile, a vigilante calling himself Baron Cauchemar (“Nightmare,” en français), clad in armor and wielding strange weapons, is likewise terrorizing criminals in London’s seedy underworld.  Are the bombings and this new crimefighter related?  Holmes certainly thinks so.  He and Watson are brought in to see what they can do, ultimately running afoul of a truly despicable villain (whose identity I won’t spoil, though you won’t have any trouble figuring it out).

I should note that this is a very cinematic, over-the-top steampunk action thriller, particularly in the finale.  Again, I don’t want to spoil key plot points, but while this begins with a more or less standard kind of Holmes mystery, it very quickly becomes a mash-up with some of the wildest imaginings of Jules Verne mixed in liberally.  If you’re looking for a staid piece of detective work, you won’t find that here.  While I enjoyed all the science fictional elements included, I should reiterate that because they are truly over-the-top they might not suit all readers.

In the second half of the novel some of the diction doesn’t sit quite right with me – at times, Holmes doesn’t really sound like Holmes – but in general, I think that Lovegrove has done an admirable job of capturing the spirit and flavor of Sherlock Holmes.  Indeed, at several points Lovegrove goes out of his way to provide nods to several of the iconic characters and offer his take on several of the inconsistencies that readers have identified in the original Holmes canon.

Lovegrove is a darn good writer who demonstrates his skills here.  This is a quick read and a fast-paced, engaging story.  I heartily recommend THE STUFF OF NIGHTMARES to fans of steampunk – you won’t be disappointed – as well as fans of Sherlock Holmes who don’t mind mixing a heavy dose of Vernian steam-powered craziness in with their detective work.