Sharknado (Yes, That Sharknado) in Theaters for One Night Showing on August 2nd. 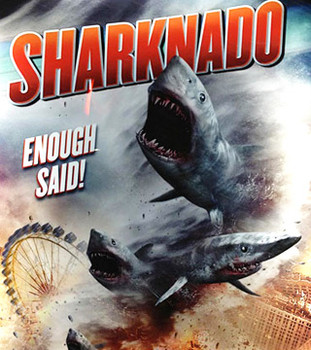 The masses have clamored for it and the good people at SyFy have heard you.  A sharknado will be hitting a theater near you at Midnight on Friday August 2nd.  As you probably know, Sharknado was a social media sensation.  Entertainment Weekly reported that the campy movie debuted on July 11 with 1.4 million viewers. The movie then went viral, and I mean amazingly viral.  At one point on Twitter it was trending at an incredible 5,000 tweets per minute.  It saw it’s second showing on SyFy increase to 1.9 million viewers, with it’s third airing on July 27 bringing in 2.1 million viewers, a record for the SyFy.  I and two of my sons may or may not have been among the 1.9 million viewers during the second airing.  I can confirm nothing.

To learn more about the Sharknado phenomenon and how you can get your tickets to this event, just click here to be forwarded to the Fathom Events website.

Special Fathom Features: In addition to the big screen presentation of this “made-for-TV guilty pleasure,” cinema audiences will be treated to never-before-seen footage including a behind-the-scenes featurette and a gag reel!

At midnight on Friday, August 2nd join Fathom Events and The Asylum in select cinemas nationwide for an exclusive showing of Sharknado!

Described by Entertainment Weekly as “… an hour-and-a-half of ridiculous, slapstick, theatrical, scientifically-impossible fun,” Sharknado, is the story of beachside bar regulars who team up to investigate the ecological nightmare that has deadly sharks swimming through the streets of Los Angeles and falling from the skies.

Get your tickets today because this one-night event will be your only chance to see this instant cult favorite on the big screen!