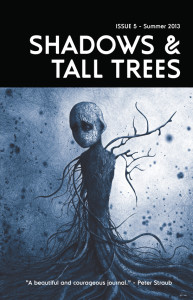 Shadows and Tall Trees is a quarterly journal of literary horror offering subtle, quiet stories bound by a clear editorial philosophy.  Editor Michael Kelly presents stories emphasizing the weird, the dark, and the psychological, and avoids more conventional stories that might be found in other horror outlets.  The goal is to provide a distinctive literary voice for fans of thoughtful, low-key fear.  It appears to be working, given the accolades the first four issues have earned, including numerous year’s best selections and honorable mentions. After five issues, the format will change to an annual anthology published in paperback and ebook formats. Issue five contains fiction by Ray Cluley, Gary Fry, Richard Gavin, Claire Massey, Daniel Mills, Lynda E. Rucker, Karin Tidbeck, and D.P. Watt, and an essay by V.H. Leslie.

The stories are very well written, with the authors presenting strange Romantic tales of lurking shadows and disturbing mystery in wistful, evocative prose. Horrors build and recede at a pace that allows the reader to really savor their development. Together, they form a delightful collection of ghost stories and strangeness that charms the reader. From an editorial perspective, the stories mesh exceedingly well. The unveiling of histories of loss and the psychological echoes of tragic secrets are common themes. Geography also seems to be important. This may be a feature specific to this particular issue, but physical spaces are a central concern: wheat fields, the sea, the lunar landscape, mist-covered moorlands. It gives the work a vaguely gothic flavor.

My only criticism would be the placement of V. H. Leslie’s essay on Gilman’s 1892 story The Yellow Wallpaper in the middle of the issue. There’s nothing wrong with the piece itself, and, in a sense, it fits the overall theme of the volume given the concern with physical space and family dynamics, but inserted into the middle of the text it serves to pull the reader out of rhythm. Indeed, I initially took it as a fictional conceit, and was wondering when the plot would emerge before I realized it was a nonfiction essay. Set off in a separate section at the end it might have been a nice capstone, but as it was it distracted more than it contributed.

That said, I can strongly recommend Shadows and Tall Trees Issue Five.  It is an excellent collection of fiction that favors growing apprehension and dread over quick cuts of shock and outrage.