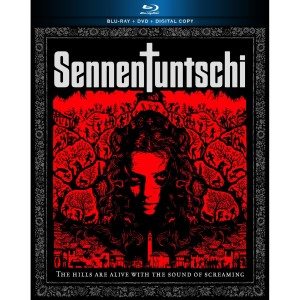 Despite its subtitle of “Curse of the Alps” this Swiss import is not a horror movie. At all. It is a mystery thriller with possible supernatural overtones. Know that before you buy this new Blu-ray from Invincible Pictures.

OK, now that we have that out of the way, let me say that it is a strikingly beautiful movie that is well directed, acted, and did I mention that it’s beautiful? The Swiss Alps is about as picturesque as you can get, and this film never misses an opportunity to show off the gorgeous scenery. If you like your movies to be visually pleasing, this one has that in spades.

As for the story, it is based off of some Swiss folklore that I’ve never heard of before, and that always catches my interest. One day, in an isolated, little mountain town, a priest lands himself and then shortly after that, a beautiful and filthy young woman shows up out of the blue. The woman doesn’t speak and seems almost childlike in her innocence and wonder. The town’s only police officer takes the girl under his wing as he tries to figure out who she is, where she came from, and how she came to wander into his little berg.

The movie’s B plot concerns three goat shepherds living up in the mountains who are very lonely, being away from any sort of female company. One night during some drunken fun, the eldest of the trio tells the newcomer a legend about the Sennentuntschi, a golem-like creation made by some similarly lonely men a long time ago. It seems that the men made a woman effigy out of a broom and some clothes that one night came to life as a real, live, and beautiful girl. This Sennentuntschi did all the housework for the men during the day, and at night she took care of all of their carnal needs as well. Then one day she got angry and killed, skinned, and made fleshy dolls out of all the men that had created her.

Surely that bit of folklore has nothing to do with the strange young woman that was discovered in the closest town? Well that question is the heart of this film. The mystery of who the girl is, what’s her tragic backstory, and how the three lonely shepherds fit into things. The story is well written, and told in a unique fashion that avid movie watchers may pick up on before the big reveal, but nevertheless remains entertaining. While this film was never once really scary, there are some nice bloody bits mixed in that did bring a smile to the face of this old gorehound.

And remember how I said this was such a beautiful film? Well the new Blu-ray from Invincible Pictures really sell that. Everything here looks amazing in HD. Yes this is a subtitled movie, so haters of that, be warned! Hopefully the thought of reading something won’t keep you from experiences this well done, unique, little supernatural mystery. If you are a fan of such things, consider this one well recommended.