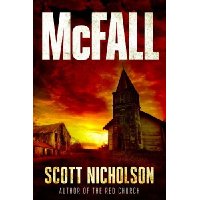 International bestselling author Scott Nicholson returns to his supernatural roots in the new serialized novel McFALL, launched Sept. 3, with new episodes releasing every six weeks. The supernatural thriller, from Amazon’s 47North imprint, features characters from THE RED CHURCH, a Stoker Award finalist and alternate selection of the Mystery Guild Book Club, and DRUMMER BOY, a ghostly coming-of-age tale. The stories are set in the rural Southern Appalachian Mountains where Nicholson lives and are inspired by actual local legends. “I’ve wanted to return to this world and revisit the characters as older and a little more scarred by their experiences,:” Nicholson said. “When 47North offered the opportunity to write a serial, I jumped at it. I am always eager to experiment, and Amazon is proving progressive in its digital publishing approach.”  I’ll still be writing McFALL as it goes live so it’s a bit like walking out on a tightrope in flaming underpants over a canyon full of cobras. Or perhaps it’s just another day in cyberspace.” Although it’s exclusive to Amazon, McFALL will soon be published in paperback and audiobook. New episodes are automatically emailed to the Kindles of those who order the first episode. Learn more about the project and enter a Kindle Fire giveaway at AuthorScottNicholson.com.

The book can be purchased at http://www.amazon.com/McFall-Kindle-Serial-ebook/dp/B00DOFW8BM.

McFALL – “If Evil had fortified secret strongholds across the globe, the red church was certainly one of them.” When wealthy developer Larkin McFall moves to the small Appalachian Mountain community of Barkersville, generations-old tales of supernatural phenomena, sudden deaths, and odd disappearances resurface. Larkin laughs off the stories as superstition, while promising to bring a bright new future to the dying town. Sheriff Frank Littlefield senses a diabolical motive in McFall’s good intentions. High school friends Bobby Eldreth and Ronnie Day also suspect that an evil menace has invaded Barkersville, but both soon fall under McFall’s spell. Has the sinister presence that once infiltrated the abandoned, perhaps haunted, red church spread to the community as McFall turns the family property into a luxurious subdivision? When those who oppose Larkin McFall’s ambitions begin to die horrifically, or even worse, become the man’s biggest supporters, Sheriff Littlefield’s investigation uncovers a man with no past and no fingerprints. A man who destroys people by giving them exactly what they want.