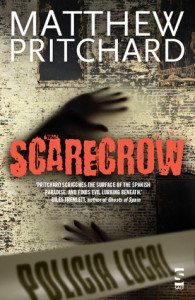 Reading Scarecrow, I discovered that author Matthew Pritchard did indeed write what he knew.  Fashioning his main character Danny Sanchez as a journalist for an English Ex-pat newspaper in Spain, he obviously drew upon his own experiences in the same position to get the character right.  Now, throw in some low-level thugs, corrupt politicians and an event in his own past that still haunts him and you already have once heck of a story.  Especially after the first body is found walled within a house about to be destroyed by said corrupt public officials.

Pritchard has a way of bringing his character to life and vivid in the readers mind using only a few description passages.  That is talent.  That talent expands to his locations, where the reader feels as if they are standing and watching from the sidelines, whether in Almeria, Spain or in England.  The story flows from page to page, each causing the reader to want to know what happens next.

When the serial killer who is at the heart of this story, is introduced, you may be reminded of certain notorious serial killer from the states.  I won’t say which, because I don’t want to spoil it.  All I can say is that as I first read the killer, a smile broke on my face, because I knew who he was modeled after.  And even if the reader doesn’t get it – I promise it won’t distract from the story at all.

By the time you reach the middle of this book, and no – there is no saggy middle, you may wonder exactly who is chasing who.  That keeps the excitement level of the story at a high level and will keep you reading to find out what is truth, what is fabrication and what is the resolution that the author has planned for the characters.

I have no idea of whether this is the authors debut novel, but I’m guessing it may well be.  If so, I stand and applaud him.  I will also find his author page and sign up for notifications of when his next book will be released as I don’t want to miss it.  He is that good folks.

Now, with all that praise there is one small criticism of the print edition.  The font the publisher used is entirely too small for older eyes (and quite possibly many younger ones, also).   A bit of joy was taken from the reading of Scarecrow because I could only read a few pages at a time, with out getting a headache from the print, even with glasses.  At the same time, I am so glad I didn’t put it down permanently.  My suggestion to readers is if you have the same problem with small print to wait for an ebook edition where you can enlarge the font.