Say ‘No’ to Drugs – Book Review 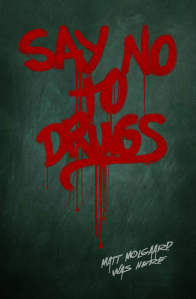 Billed as “a double feature told in the tradition of vintage drive-in tales”, Say No to Drugs lives up to its tagline, also serving as a twisted PSA delineating the possible perils of recreational drug use.

“The Pot: An Homage to Classic Cautionary Tales of the 1950” starts things off with a bang (or a crunch or a splat). It centers around Terry and Ray, a couple of burnout kids looking to score some “killer weed” from their acquaintance, Jimmy (friend is too strong a word to use in this case, as it’s obviously just the drugs they’re after). They go to Jimmy’s house to seal the deal, and discover just how much of a killer the weed really is. You might think you’ve got the story pegged at this point, but not to worry. Molgaard’s writing doesn’t tread the obvious path. The titular pot becomes little more than a gateway drug to fathomless nightmare. Nearly the entire landscape of the house soon becomes an object of terror, and Ray and Terry are privy to something the likes of which probably doesn’t belong on any terrestrial plane. As brutal as things get, it’s always fun, much like the 50s-kitsch-inspired tales it pays tribute to.

The next story, “Blue”, cranks up the intensity more than a few notches and blows the first story out of the water in that regard. Here the fun factor is tossed aside in favor of pushing all your discomfort buttons. It strikes a nice balance with the preceding tale. It’s basically about a man waking up in a room and trying to figure out what’s going on. As meager as the plot may seem, Molgaard makes up for it as he pushes his character through a living hell of painful memories, horrifying hallucinations (or are they?), and images of a dead lover. The stream-of-consciousness style works well here, prose like a freight train pummeling everything in its path, as if everything hinges on getting each and every dirty detail on the page, no matter how small or superfluous it seems. It’s the kind of writing that makes you want to stop, take a breath, and ground yourself so you don’t get lost along with the main character. It’s got a great twist at the end, too.

As a double dose of cautionary tales, and a brisk and hard slap across the face, Say No to Drugs works wonders. It’s an exploration of two very different kinds of trips, and a fine sample of two different styles of horror story from Matt Molgaard. Hopefully we’ll have some more to read in the near future.