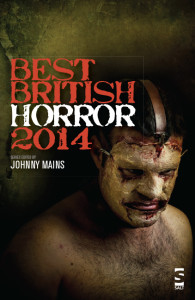 WELCOME TO THE NEW HOME OF HORROR….

From Salt’s award-winning stable of ‘Best British’ anthologies, comes Best British Horror (5th June 2014). This fabulously gruesome new anthology is dedicated to showcasing and proving without doubt, that when it comes to horror and supernatural fiction, Britain is its obvious and natural home.

Edited by the British Fantasy Award winning editor Johnny Mains, Salt’s ‘Best’ series takes a journey into the bottomless depths of horror. You will find no ‘pleasing terrors’ here.

Johnny Mains is an award-winning editor, author and horror historian. He has written for Illustrators Quarterly, SFX and The Paperback Fanatic. He has also been featured in Fangoria, the world’s biggest horror magazine. He was project editor to Pan Macmillan’s critically acclaimed 2010 re-issue of The Pan Book of Horror Stories and is currently co-editing Dead Funny with multi-award winning comedian Robin Ince. Mains is the editor of five anthologies and is the author of two short story collections.

‘Mercy stands before her, wielding a mud-caked pickaxe in both hands…’

‘Too much Semtex was an obvious, beginners mistake, and I noted I needed to remove more brain in future…’

‘There isn’t much time. Blood is already spattering the paper on which I am writing…’

‘It appeared to be an insect of some kind, perhaps a beetle or a spider with a bloated body…’

—Come Into My Parlour, Reggie Oliver