So, the creator of The Walking Dead has another horror comic in development for the small screen.  Count me in!  Below is the press release: 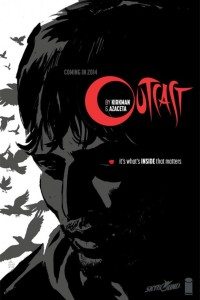 Outcast was shopped as a spec after it was developed internally at FIC and is Kirkman’s first time penning a pilot. It was pursued by a number of leading cable networks before landing at Cinemax. The TV adaptation is based on Kirkman/Skybound’s recently announced comic book by the same name. Kirkman will serve as Executive Producer alongside David Alpert of Circle of Confusion.
Outcast follows Kyle Barnes, a young man who has been plagued by possession since he was a child.  Now an adult, he embarks on a journey to find answers but what he uncovers could mean the end of life on Earth as we know it.
“Despite the success of The Walking Dead, Outcast is only my second foray into the horror genre.  I think Kyle Barnes is every bit as compelling as Rick Grimes and demonic possession is way scarier than zombies–so this is going to be fun,” said Robert Kirkman. “Starting a new project is like setting off on an long journey and I couldn’t ask for better travel companions than David Alpert and Sharon Tal Yguado and I’m thrilled to be a part of what Cinemax has planned for the next few years.”
“At FIC, we’re committed to creating compelling, innovative television with A-List writers like Robert Kirkman, and with Cinemax we have a partner that is as passionate as we are about this very unique project,” said Sharon Tal Yguado, Executive Vice President of Original Development and Scripted Programming at FIC. “Outcast is unlike anything on television and has the potential to become another global phenomenon.”
FIC’s long-standing partnership with Kirkman began on the record-breaking, global hit series, The Walking Dead, on which FIC is the international partner and global broadcaster in 125 countries. Outcast is the latest example of FIC’s mission to develop breakthrough character-driven dramas in the U.S. that can translate into global tentpole franchises. FIC pioneered its global day-and-date release strategy with the hit series The Walking Dead, and replicated it with key properties, including Da Vinci’s Demons and The Bridge. The group most recently announced a development deal for the espionage thriller, False Flag, in partnership with Keshet International and Peter Landesman, the writer and director of Parkland.