Ritual Crime Unit: Under the Skin by EE Richardson Out Now for Kindle, Nook and Kobo and Other ereaders, and as a Limited Edition Signed Paperback 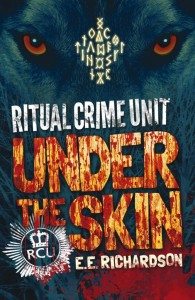 Abaddon Books is announcing their newest book by E.E. Richardson.

Ritual Crime Unit: Under the Skin is the first in a new series of urban fantasy police procedurals  from Abaddon Books – available in ebook for Kindle, Nook, Kobo and DRM-free download, and in strictly limited numbers as a signed physical edition from Forbidden Planet.

A tough, hard-nosed career officer in the male-dominated world of British policing, DCI Claire Pierce of North Yorkshire Police heads Northern England’s underfunded and understaffed Ritual Crime Unit. Ignored by the traditional police, struggling with an out-sized caseload, Pierce is about to tackle her most shocking case so far.

Following reports of unlicensed shapeshifters running wild in the Dales, DCI Pierce leads a failed raid to capture the skinbinder responsible. While the dust is still settling, a team from Counter Terrorism turns up and takes the case off her. Pursuing the case off the record, she uncovers something murkier and more terrible than she suspected. Has her quarry achieved the impossible and learned to bind human skin?

Under the Skin marks not only the beginning of a new series for Abaddon but also a different way of publishing.

E.E. Richardson has been writing books since she was eleven years old, and had her first novel The Devil’s Footsteps picked up for publication at the age of twenty. Since then she’s had seven more young adult horror novels published by Random House and Barrington Stoke. Under the Skin is her first story aimed at adults. She also has a B.Sc. in Cybernetics and Virtual Worlds, which hasn’t been useful for much but does sound impressive.