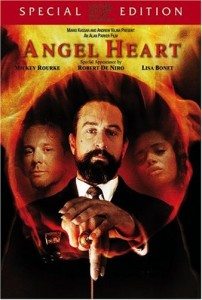 We are certainly giving the Devil his due this Halloween season as our Retro Chills continue with one of the best horror thrillers of the Eighties and one of the most controversial and divisive films ever made, director Alan Parker’s brilliant 1987 genre entry Angel Heart.

Based on the William Hjortsberg novel Fallen Angel, the film is a master class vision of satanic terror. It is dark, gritty, and extremely evil and is filled with some of the best horror atmosphere in all of cinema.

The story follows 1950’s Brooklyn private eye Harry Angel, played to sleazy perfection by Mickey Rourke who was at the height of his career at that time. Angel is hired by the lawyer of one Louis Cyphre to find a missing crooner who goes by the name of Johnny Favorite. Cyphre claims that Favorite needs to make good on a past debt and wants Angel to find him very soon.

Harry Angel knows immediately that something is wrong and a bit sinister with this new case and he soon finds that it goes way beyond being just another missing person.

Harry Angel’s case will lead him down the darkest corners of New York and take him all the way to New Orleans; deep into the world of witchcraft, voodoo, and devil worship.

Along the way he will meet an alluring, sexy, and mysterious voodoo girl named Epiphany Proudfoot, played with a true sultriness by Lisa Bonet, making a jarring acting leap that is miles away from her years on the Bill Cosby Show.

With each new lead, Angel plunges deeper into a hidden world of macabre and evil from which he cannot seem to run from. As the case grows more horrifying and dangerous with each new reveal, Angel’s own sanity and very existence begin to come into question.

When word came of the casting, the film world was exited. Mickey Rourke was touted as the new Brando (and they were right!) and was giving daring and exciting performances from film to film. Now he was to be paired with Robert De Niro in a film from the director of Midnight Express and Pink Floyd: The Wall. The buzz while the film was in production was very good.

Robert De Niro plays Louis Cyphre as sly and mysterious. He speaks in a hushed and relaxed tone never raising his voice. He has long hair pulled back in a ponytail, a dark beard, long fingernails, and is always dressed in black suits while brandishing a shiny cane. The actor never chooses to chew the scenery but we can see that he is having fun with his role. There is a great moment where tells Angel that the egg is supposed to represent a man’s soul and then peels an egg and takes a big bite while staring Angel in the eyes. It is a funny and very creepy scene.

The supporting cast is rounded out by the great Charlotte Rampling who is very good here as a woman who holds a dark secret and perhaps the key to the mystery of Johnny Favorite.

Lisa Bonet is striking in her film debut. She plays a character that has a natural beauty and abandoned sexuality. Her eroticism burns off the screen and her chemistry with Rourke is as sexy as any put on film. Bonet gives a performance that is alive. Sadly, all anyone could talk about was her graphic sex scene with Mickey Rourke and the greatness of her performance was lost in the controversy of seeing the sweet “Cosby kid” having sex on film. It is a stunning debut and one that deserves positive attention.

The performance of the film is Mickey Rourke. In my opinion it is his finest moment as an actor. The character is a true sleaze bag of a man and Rourke still manages to find the human qualities inside him. This is a man who always looks as if he has just rolled out of bed but he has the smarts to navigate his way through the seedy areas and people that are necessary encounters in his line of work.

Rourke brings a sense of humor and, eventually, a real sadness to the character of Harry Angel. The actor runs the gauntlet of emotions here and delivers an Oscar worthy turn that will endure.

Director Parker set out to make a detective thriller but was sent Hjortsberg’s book Fallen Angel and felt the combination of horror and private eye thriller would be great for the big screen. Parker has stated that Angel Heart is his “Humphrey Bogart goes to Hell” film.

Parker’s films have always had a darkness about their look and here the style works beautifully. He and cinematographer Michael Seresin keep Brooklyn in dark greys and blues, giving it a bleak and wintery look while giving New Orleans a bright and orange hued palate that lets you feel the heat of the city.

There are many spooky moments in this film and the director gives us glimpses throughout, never fully lingering on the evil too long. We see violent murders, voodoo rituals, satanic worship, blood stained walls, ceilings that rain blood and entrails, and a grotesquely rotted corpse that comes in a moment that will shock you.

That these scenes are done in quick flashes while zooming in closer and cutting away before our eyes adjust adds to the creepiness of the atmosphere. To a point, this film is an exercise in style and features some of Alan Parker’s finest directorial moments.

By the end, the mystery is revealed and it is a doozy! As we look back at the screenplay after the movie is over, there is an argument to be made of the fact that it really isn’t too hard to figure out. However, when it comes it will knock the wind out of you and it is a finale that is earned due to the diligence and wits of the writer and director.

The film had a lot of buzz that turned negative when America learned of the sex scene between Rourke and Bonet. The MPAA forced cuts of that scene to prevent an X rating. I have seen the uncut version and it is nothing that we cannot see today on True Blood or Masters of Sex or almost any TV show on HBO or Showtime. Unfortunately, all of the controversy turned good buzz into bad press and the film suffered at the box office. It was primed to be a hit film starring two of the decade’s most exciting actors but turned into a silent flop.

The film deserves to be reevaluated and rediscovered. It is a film that is rich with great acting and superb direction. From the lonely saxophone sneaking into the strings on the film’s score, courtesy of Trevor Jones, to the great location filming and realistic set design, Parker’s devilish vision is a masterpiece.

Angel Heart is a dark nightmare of a film that stays with you long after it is over. It is unsettling and shocking at times but very rewarding.