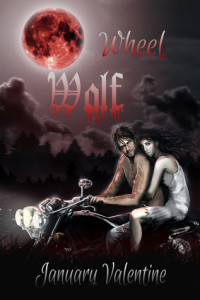 Werewolf horror author January Valentine, is releasing her fifth novel, Wheel Wolf, in August 2013, and alongside the release are several Rafflecopter giveaways where lucky winners get signed paperback copies of the novel, Wolf t-shirts, tote bags, werewolf jewelry. Surprise gifts to be announced.

Wheel Wolf delves into the dark and interesting realm of werewolves, and through the main character Jack Bailey, takes the reader into the intense, gripping, and dramatic tale of how an ordinary man comes to grips with his change into a werewolf.

Numerous werewolf horror movies and novels are published every year, each with a purpose of telling the mystery behind werewolves. However, few authors manage to really showcase the emotions, suspense, twists, and realizations that main characters go through, and January Valentine is among those few.

Wheel Wolf follows the story of Jack Bailey, a soon to be forest ranger in upstate New York, who endures a scary attack from an unknown creature one night as he is speeding home from his girlfriend’s house. The attack leaves him paralyzed from the waist down, as well as the main suspect in a murder investigation stemming from a dead girl’s body found pinned to his body. Jack must deal with his physical injuries, proving his innocence, as well as the extraordinary abilities the vicious attack seems to have brought upon him.

January Valentine is a New York writer and indie book publisher, and has made a name for herself by publishing novels in the romance, horror, new adult and contemporary romance novel categories. Besides writing, she blogs and hosts the show Away With Words on Blogtalkradio, as well as managing her own website (http://www.januaryvalentine.com)

For further information on how to get a copy of the book and enter into the raffles, contact: [email protected]