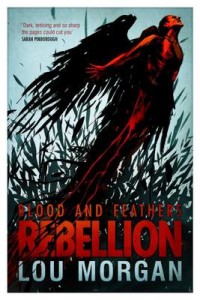 A violent, blood-soaked scene sets the stage for this follow-up to Lou Morgan’s “Blood and Feathers”, the first book in her Heaven vs. Hell series. Our quirky and now less reluctant protagonist Alice is still struggling to come to terms with her angelic heritage and abilities. She finds that the battle she fought in the first book is nowhere close to over.

The angel of death, Adriel, approaches her with an offer of employment to work for him as he’s an undercover undertaker, but the Fallen are all too eager to come after Alice and do so with a vengeance. Over on the Archangel Michael’s turf, he knows better than to fall for Lucifer’s many subterfuges, and has to deal with the fact that Alice poses great problems for him going forward, which only serves to make things worse for her. As well, it doesn’t take Alice too long to realize that Lucifer is not quite as defeated as he may have seemed in the first book. And his cronies are still as strong as ever. The Fallen get the upper hand early on, proving to be more of a challenge to overcome this time around.

There’s also discussion of handing Alice over to Michael, which is one of the primary points of contention. Team Alice spends the novel strategizing after the action that takes place in the first third of the book to figure out just what to do going forward. Lucifer wants absolute war and Michael is only too happy to oblige, but both sides know that this would result in too much destruction that neither faction would recover from.

This time around, we also learn more about how the original war started. Unfortunately, destroying Lucifer is not as simple a matter as it may seem. It would be like hitting a reset button, the cost of which I don’t want to spoil, but basically, it wouldn’t put an end to him and would have disastrous consequences. Clearly there’s more story to be told and more epic confrontations to come in the next volume of the series.

But the book isn’t just a one bad event after another. As with the first book, the dry British wit is excellent and provides much-needed comic relief from the grave situations Alice finds herself in. There’s also a section at the back of the book that includes symbols associated with each of the important angels, as well as a playlist. As well, author Morgan’s focus on the epic plot, confrontations, strategizing, and world-building is a welcome relief from the overabundance of largely uninspired romantic plots involving angels that are all too common on bookshelves these days. Instead, this book marks yet another entry into one of the most memorable urban fantasy series of the last few years.