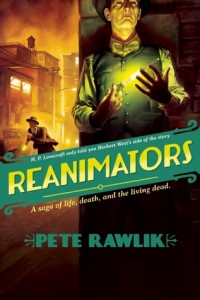 Reanimators is an entertaining homage to pulp-era fiction in general, and the Cthulhu Mythos in particular, written with evident affection by author Pete Rawlik. Rawlik has taken characters and events from Mythos literature, Fortean Apocrypha, and real history, and tied them together around a minor character from The Dunwich Horror, Dr. Stuart Hartwell. As re-imagined by Rawlik, Hartwell is a contemporary of Herbert West and Daniel Cain, and among the victims of the experiments first described in Lovecraft’s Herbert West: Reanimator. Hartwell becomes obsessed with West’s research, and undertakes a parallel career of medical experimentation. The text is jammed with characters, locations, and events from many sources, and even nods to contemporary Lovecraftian writers. Readers who know the Mythos may enjoy the density of allusions. A pleasure of the book is identifying the intertextual elements throughout. Those less familiar will not pick up on everything, but that shouldn’t be a barrier to enjoying the work itself. I found myself pulled to look up elements of the book as I went, and revisiting stories I have not read in years. An annotated edition detailing the source material and reasoning behind the connections would be enjoyable.

Individual chapters are short, and many could stand alone without reference to the larger arc of the book. Each carries a satisfying twist or jolt by the end, in a manner reminiscent of early movie serials or serialized pulp magazine stories. Although some chapters could be read as retelling original Lovecraft stories from the perspective of a different character, I don’t think it would be fair to describe the work as a simple pastiche with little new added. Rawlik has worked to augment the material that is derived from other sources with his own original ideas. I do think that the desire to include so many elements from classic stories works against the overall structure of the book, which seems to wander. There is no particular reason for Dr. Hartwell to be a part of some of these events, except to allow them to be retold from his perspective. It feels a little forced at times, and by the end, there isn’t a clear sense of a larger overall plot. At times, Hartwell simply appears, Forest-Gump-like, at various points in Mythos history.

In terms of style, the author imitates an antiquarian voice. This can be hazardous, as it gives a writer a lot of room for error or anachronism, and it can be difficult to remain consistent. Some people don’t care for it, as it can feel a bit stilted and serve to distance the reader. In this case, I think it is a good choice. Rawlik is generally successful in maintaining the voice and it works well for the book. The tone evokes the era and inspirational sources effectively, but remains crisp and direct enough for the modern ear.

The cover copy suggests the book will focus on the ongoing relationship between the narrator and Herbert West. Although West is clearly important in the narrator’s background, there is little interaction, and it is not clear for most of the book that West has any awareness of the narrator’s interest in him or his work. As a result, any rivalry appears to exist only in the mind of the narrator. Lovecraft was fond of unreliable narrators, but it does set up certain expectations for the reader. The disconnect between the expectation created by the cover and the book as written does create a sense of a letdown once it is clear that the narrative is heading in a different direction. This is unfortunate, as the book is a fun read on its own merits. The title itself remains appropriate despite this in that most of the characters involved have some interest in research on life- extension and the animation of the dead. Many pursue the same quest as West, or know of him, but the narrator’s primary relationship is with his own work, and the people destroyed by it.

Reanimators is an engaging and entertaining romp through Lovecraft country, and a fitting tribute to the pulp classics. I think that fans of the Mythos will find a lot that they enjoy in the book. Readers unfamiliar with Lovecraft and his circle may find that this is a welcome place to discover that rich literary tradition.