The Hollywood Reporter says that Rachel Rising, the horror comic book series by Terry Moore, is coming to a small screen near you.  According to their published report, Alcon Television Group, the TV arm of Alcon Entertainment, made the comic it’s first acquisition after being in existence for less than a year.  They also report that Moore will serve as an executive producer with Lloyd Levin.

For those of you not familiar with Rachel Rising, THR says it “centers on a woman named Rachel who wakes up dead in a shallow grave. She begins to unravel the mystery of her death while crossing paths with not only friends but also a mysterious blond woman who is tracking her and a horrific little girl named Zoe, out on a killing spree. Also figuring into the mix is the history of the local town, magic and witchcraft.”

I don’t know about you, but I have to say I’m interested.  I’ll keep an eye on this and let you know how this develops. 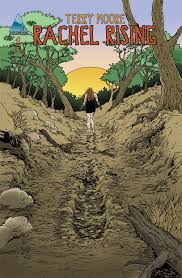