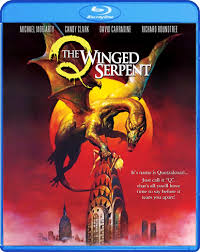 Do you love monster movies? I’m talking about old school, stop motion animated monster flicks the likes of which they just don’t make any more? Do you worship at the altar of Ray Harryhausen? Hell, what self-respecting monster lover doesn’t? If you said yes to one or any of those questions then you will want to watch this movie, if you haven’t already. No, Mr. Harryhausen didn’t create the creature effects in it, but his faithful acolytes did, and it is very much an homage to the man’s art.

What, you need more than that to check out this flick? OK, how about this: it’s a slice of cheesy 80s goodness. It was written and directed by Larry Cohen who gave the world such low budget but cool classics as It’s Alive, God Told Me To, and The Stuff. It has Michael Moriarty in it at his twitchy, sweaty, mumbling best. David Carradine at his I don’t care, I’m just here for a paycheck usualness. Oh, and Richard (Shaft) Roundtree at his coolest. All that and a giant, winged, snake-dragon-god thing to boot. What’s not to love? But if you still need convincing, the nickel tour for Q is about to begin in earnest.

Michael Moriarty plays a musician and petty criminal who one day finds a giant nest in the towering Chrysler Building while running from some thugs. But that nest doesn’t belong to Big Bird, it belongs to a huge flying snake god of the Aztecs called Quetzalcoatl. Or in this case, Q for short. What’s the big South American lizard doing in New York City? Well it seems that there is at least one Aztec priest still alive that enjoys skinning people for his scaly god, and naturally he’s in New York. It is those bloody sacrifices that have brought Q to the Big Apple. Giant monster hijinks are soon to follow.

While visiting the city that never sleeps, Q enjoys snatching up people from rooftops and flying in the path of the sun so people below can’t see it, even while it is raining the blood of its next meal down on them. After this happens a few times, the NYC police department eventually gets a clue, and this leads to a climatic King Kong like showdown with Q, the cops, lots of guns, and even a helicopter or two. And really, that’s about all there is to this flick. There’s no twist ending, no mystery, no deeper meaning to be found here. It’s just a simple but effective story with a neat monster and some gory effects. Sometimes simple is good and it is so here.

Keeping with that simple theme, the extras on this new Blu-ray from Scream Factory are sadly minimalistic. There is a commentary track with writer/producer/director Larry Cohen, a trailer, and a teaser. That’s it. While at the end of the day Q could be considered to be just a dopy 80s monster movie, a little more love should have been shown to it than what it gets here. At least Scream Factory did their usual job of making everything look pretty.

Q The Winged Serpent is not for everyone, but it is certainly for any lover of giant monster movies. If, that is, you then pick this Blu-ray up when it comes out August 27th. If you’re not a fan of big monsters doing naughty things to cities, then this movie won’t change your mind, so you might want to skip it.