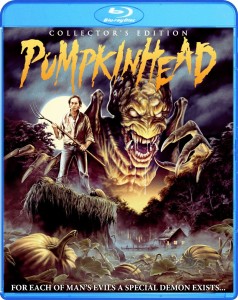 Damn, this movie looks good. I thought I would start out with that since Scream Factory has put out one hell of a great looking transfer of one of my favorite creature features from the late eighties. The fact that this movie was written, directed, and the monster was created by special effects legend Stan Winston, means that it had better look amazing, and this new Blu-ray release doesn’t disappoint. But what about the movie itself? Has it aged well, like fine wine, or has it turned to vinegar over the years? Well there’s only one way to find out, so come with me way down south and let’s have a look, but be careful who you wrong, lest Pumpkinhead comes looking for you.

Some dirt bike-loving twenty-somethings head out to the country to race around on their scooters, and in the process of drinking and riding, one of them run over and kill a small child. The culprit behind the boy’s death flees and forces his friends, some at gunpoint, to come with him and hide out in a cabin as he’s afraid of what the law will do to him. What the drunken idiot should have been afraid of is the boy’s vengeful father, played to teeth-gnashing perfection by genre vet, Lance Henriksen. Now the mad dad doesn’t grab a gun and go all Deathwish of the teens. Instead he turns to one of the creepiest witches in movie history for a bit of payback. Her weapon of choice? An eight foot tall, beautifully monstrous demon of vengeance called Pumpkinhead.

Pumpkinhead is the real star of this show, although Lance is damn good here as the belivable . But if it wasn’t for the amazing, and practical, creature effects behind this towering terror, this movie would just be another typical slasher with supernatural overtones. Watching this horror rip through his victims is a thing of joy for monster lovers of all sorts, but if that’s all this movie had going for it, it would be good, but nowhere near as great as it is. Backing up the scene stealing creature are a cast of characters, you actually feel sorry for, because only one of them is a kid-killing dirtbag. The rest are all just pawns in a game of vengeance. A lesser movie, or sadly most modern ones, would have had all of the young city folk be reprehensible douchebags in an attempt to “keep it real.” Not this movie, and because of that, there is a wonderful moral duality to the story that is seldom seen these days. On one hand, you want Lance to get his revenge for the loss of his boy, on the other, you feel pity for those bad ol’ Pumpkinhead is killing who played no part in the death of the boy. As if that wasn’t enough, this movie simply looks amazing, and I’m not just talking about the creature or the new HD transfer.  Cinematographer Bojan Bazelli knocks it out of the park making sure every shot drips with atmosphere. This is one creature feature that doesn’t skimp on the actual thrills or chills.

Now on to the extras and goodies that Scream Factory usually load their releases up with. First, there is an audio commentary with co-writer Gary Gerani, creature creators Tom Woodruff Jr. and Alec Gillis that is moderated by filmmaker Scott (Intruder 1989) Spiegel. There is a retrospective featurette called “Pumpkinhead Unearthed” that runs over an hour. There is a very short (7 minutes) collection of behind the scenes bit on the creation of the titular monster. There are a collection of interviews on here, one with Richard Weiman, who wrote the story with Stan Winston, that’s over 16 minutes, another 14 minute interview with actor John D’Aquino who plays the reprehensible Joel in the film, and a third with Matthew Hurley that played Lance’s doomed son, that’s also 14 minutes long. There is a nearly five minute feature called “Demonic Toys” about the cool toys made in the likeness of good ol’ Pumpkinhead. There is a touching tribute to the late, great Stan Winston, that’s about 50 minutes long. A still gallery and theatrical trailer bring this impressive collection of extras to an end.

Pumpkinhead is a monster movie that still has bite even after all these years. If you’ve already seen it, then you know that. If you haven’t, then you’re in for a treat. Either way, get this new Blu-ray when it comes out September 9th. It is highly recommended.