PULP FICTION: THE COMPLETE STORY OF QUENTIN TARANTINO’S MASTERPIECE TO BE RELEASED IN NOVEMBER

I know, it’s not horror, but come on.  Who didn’t absolutely love this movie? 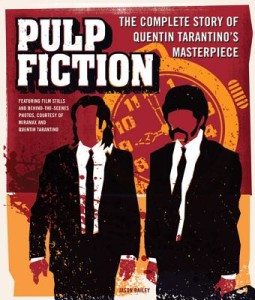 [Minneapolis, MN]  In Pulp Fiction: The Complete Story of Quentin Tarantino’s Masterpiece, film expert Jason Bailey explores why Pulp Fiction is such a brilliant and influential film. Dubbed “nothing less than the reinvention of mainstream American cinema” by Entertainment Weekly upon its release in 1994, the movie was nothing short of ground-breaking.  In this first-ever complete history of the film, Bailey discusses how the movie was revolutionary in its use of dialogue (“You can get a steak here, daddy-o,” “Correct-amundo”), time structure, and cinematography—and how it completely transformed the industry and artistry of independent cinema. He examines Tarantino’s influences, illuminates the film’s pop culture references, and describes its phenomenal legacy. Unforgettable characters like Jules Winnfield (Samuel L. Jackson), Vincent Vega (John Travolta), Butch Coolidge (Bruce Willis), and Mia Wallace (Uma Thurman) are scrutinized from all-new angles, and memorable scenes—Christopher Walken’s gold watch monologue, Vince’s explanation of French cuisine—are analyzed and celebrated.

Much like the contents of Marcellus Wallace’s briefcase, Pulp Fiction is mysterious and spectacular. This book explains why. Illustrated throughout with original art inspired by the film, with sidebars and special features on everything from casting close calls to deleted scenes, this is the most comprehensive, in-depth book on Pulp Fiction ever published.  Pulp Fiction: The Complete Story of Quentin Tarantino’s Masterpiece includes a stunning selection of movie stills and behind-the-scenes photos from the film’s production—included thanks to the generous cooperation and support of Quentin Tarantino and Miramax Films.  If you’ve ever wondered why hamburgers—preferably Big Kahuna burgers—are the cornerstone of any nutritious breakfast, this book is for you.

About the Author Jason Bailey (New York, NY) is the film editor at

Flavorwire and a film expert who has written for the Atlantic, Slate, Salon, the Village Voice, and many other publications. He saw Pulp Fiction six times during its initial theatrical release.