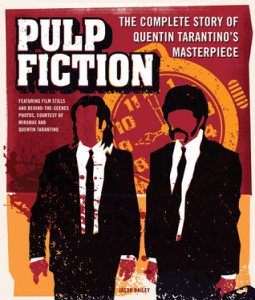 Pulp Fiction: The Complete Story of Quentin Tarantino’s Masterpiece
by Jason Bailey
Voyageur Press
Reviewed by Matthew Scott Baker
Movie geeks like me were thrilled beyond words when Tarantino first arrived on the movie scene back in 1992.  With RESERVOIR DOGS, he showed us that filmmaking didn’t have to be bland and lifeless; it could be violent, vibrant, and saturated with dramatic intensity.  I’m sure there are very few people in the industry that would argue the fact that he truly helped to reinvent American cinema.  As a result, a whole new era of filmmaking was brought forth, and the entertainment world will never be the same.Tarantino’s second film, PULP FICTION, would become his magnus opus and forever solidify his name as an iconic filmmaker.  This film is the focus of Jason Bailey’s recent release, an epic undertaking that shows us the methodology behind the madness that is PULP FICTION.  This amazing inside look lets us peek into Tarantino’s mind and show us the inner-workings within.If you are not familiar with PULP FICTION: THE COMPLETE STORY OF QUENTIN TARANTINO’S MASTERPIECE, here is the plot synopsis courtesy of Voyageur Press:

In this first-ever complete history of the movie dubbed “nothing less than the reinvention of mainstream American cinema” by Entertainment Weekly, discover everything about Quentin Tarantino’s brilliant 1994 film—from its origins to its sensational release (screaming women! fainting men!) to its phenomenal effect on how movies are both made and seen. We’ll get down to brass tacks, describing what Marsellus Wallace looks like (and what might be in his briefcase), why hamburgers—preferably Big Kahuna burgers—are the cornerstone of any nutritious breakfast, and much more. The book is illustrated throughout with glorious Pulp-inspired artwork, images of movies and cultural touchstones that influenced Tarantino, and a stunning selection of movie stills and behind-the-scenes photos from the film’s production—included thanks to the generous cooperation and support of Quentin Tarantino and Miramax Films.

If you are any kind of fan of Tarantino’s films, then this book will be a must-own for you.  It doesn’t just show behind-the-scenes footage of the film, it lets you into Tarantino’s psyche.  It describes his inspirations, his ambitions, and more.  One might even say it is semi-biographical, as it relates how specific milestones in his life can be found reflected in his films.

PULP FICTION: THE COMPLETE STORY OF QUENTIN TARANTINO’S MASTERPIECE is amazingly thorough and chocked full of articles and photos related to PULP FICTION and Tarantino himself.  My favorite aspect of this book is how it shows the influence the film has had on everyday life, not just in the movie industry.  The impact it has had on pop culture is almost immeasurable.  From quotes to gestures to facial expressions, we can see this film almost everywhere in both subtle and straightforward features.

PULP FICTION: THE COMPLETE STORY OF QUENTIN TARANTINO’S MASTERPIECE is not just a tome devoted to a movie…it is a chronicle of a generation-inspiring film that filmmakers for generations to come will study and analyze.  I highly recommend this book and suggest you pick it up asap.  It is available now.