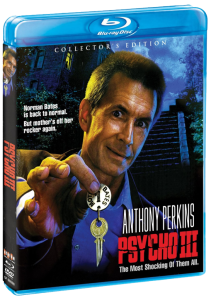 Psycho is an unquestionable classic. Psycho II was a surprisingly good sequel. So how is this third time at bat for nutty Norman and the Bates Motel? Does it play it safe and just try to do what has already been done, or does it try to brave new ground and take the series in a new direction? Maybe it tries to have things both ways? Well there’s only one way to find out. Are you brave enough to go back to the Bates Motel one more time? And if you are, should you even bother?

The answer to that last question is yes, if only by a slight margin. You see, when Psycho III was made, it was after the big slasher boom of the 80s, so this movie chose to mimic the masked maniac movies more than the original thriller that was its namesake. So everything in this Psycho has been “kicked up a notch” to make it more hip and now for 1986 audiences, such as lots more nudity and a bunch more gore. Now don’t get me wrong, I am a huge fan of 80s slashers, and buckets of blood and bare boobies are two of the things that made the flicks of that time great. That said, it is more than a little sad to see one of the Psycho movies resort to using such crowd pleasers instead of, you know, suspense, mystery, dread, or a decent plot.

Sadder still is that this was star Anthony Perkins big screen directing debut. Now he doesn’t do bad job. In fact, he directs with some real style and skill. But going into this movie, Anthony went on record saying that he wanted to make this movie more like the original. While there are some nods and lip service paid to Hitchcock’s masterpiece in here, the tone and feel that made the original so great is just gone from this film. Psycho III is a competently made, but completely ordinary, slasher film. And sorry, but I want something a little more for a Psycho movie.

As a testament to that ordinariness, here is a brief summary of the movie. At the start of Psycho III, you know Norman Bates likes to dress up as his mother and kill people. As the movie progresses, he does that over and over again. When the movie ends, there are no shocks or surprises. Yep, the whole movie has been nothing but Norman dressing up as his mother and killing people. That’s it, the end. Sure, there’s a shoehorned in love interest/replacement for Marion Crane (the woman in the infamous shower scene from the original) and a skeevy motel night manager, but both of them seem more like set dressing than actual characters here. The woman, a runaway nun, only exists to titillate Norman so that mother gets mad, and the dirt bag guy is just there to get sliced up by a butcher’s knife. To further add to the slasher comparison, various stock characters are introduced just so they can get killed. Sure that’s fine for a Friday the 13th movie, but for a Psycho film? Sorry, I expect a little more from them.

Now whether you love or hate this movie, the new Blu-ray from Scream Factory does have some pretty neat goodies on it for you. First the movie looks great here. The HD transfer was very well done. As for the actual extras, there is an audio commentary track with writer Charles Edward Pogue. There are also a handful of interviews on the disc. There is a 17 minute one with actor Jeff Fahey, a nearly 9 minute one with actress Katt Shea who plays the woman who gets murdered on the toilet (what a way to go), an 11 minute talk with make-up artist Michael Westmore, and finally a 5 minute one with scream queen Brinke Stevens who was the body double for Diana Scarwid’s shower scene. A couple of trailers and a still gallery bring an end to the extras here.

Psycho III isn’t a bad movie, it’s just a far cry from what has come before. Gone is any mystery or subtlety. There are no surprises here, everything and everyone just seems to go through the motions here, and sadly that includes Anthony Perkins. Now to be fair, he does a pretty good job his first time sitting in the director’s chair, but his turn as the titular psycho this time around just seemed lackluster. Gone is any sympathy for the character that was present in Psycho and Psycho II, he’s just another movie maniac. No more, no less. The film’s turn from suspenseful thriller to out and out slasher is also a disappointment. If you’re a fan of Norman and his murderous mother, then you’re going to want to get this movie to finish off the real trilogy. Yeah sorry, but Psycho IV doesn’t really count in my book. And don’t even get me started on the remake.