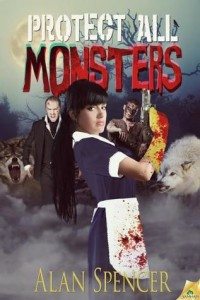 Addey Ruanova is putting herself through college by working as a cleaning lady at a sleazy pay-by-the-hour motel in Camden, New Jersey. When her brother Deke suddenly appears at the motel one night, she assumes that he wants to hit her up for drug money; instead, he forces her to stand lookout while he tries to burgle the office safe. The manager shows up, confronts them, and shots ring out. Bodies fall, and Addey is thrust into a nightmare world from which she may never recover.

The next thing Addey knows, she is being hustled through some sort of interview at a police station, where the officers are saying odd things and laughing at her, as if they know she will never report them. Then she is drugged…and ultimately finds herself a prisoner on an island somewhere in the ocean. An island staffed by the detritus of humanity—including herself—who will never be allowed to leave. Their single job: protect all monsters.

Monsters, it turns out, have existed throughout human history, but only in the past half century have governments become aware of the danger should they be allowed to proliferate. As an alternative to mass-slaughter of the creatures—with no doubt high collateral damage among ‘normal’ humans—the monsters have agreed to isolate themselves on an island where their every need is catered to, including their need for flesh and blood. Animal, yes, but also human. And when possible, living human.

Addey must discipline herself to survive her new life among monsters, human monsters as well as vampires, werewolves, zombies, and ghosts. And something more, something that slithers through the air ducts, silent and unseen.

The concept of Protect All Monsters is intriguing. If there were truly monsters, generating spontaneously, as it were, from human stock, what could be done to protect us from them and—since they are at least part human—them from us? Alan Spencer’s solution is fascinating as he guides readers through Addey’s increasing understanding of where she is, how her new ‘job’ will alter her definition of human and humanity, and what secret steps the monsters are taking to ensure their own survival.

For horror aficionados, there are gruesome scenes of death and dismemberment, of bodies thrown down chutes to feed hordes of waiting zombies, of vampires seducing and devouring unthinking staff. Addey herself suffers at their hands—and teeth—as well as survives a rape attempt by her section manager. All neatly told, all effective.

Except for one problem. Throughout, the writing does not live up to the promise of the concept. The story is marred by awkward sentence structures, misused vocabulary, strained modifiers that at times make reading difficult. Without these distractions, though, Protect All Monsters could be a powerful novel, approaching the difficult question of boundaries and dividing lines between human and monster graphically and unflinchingly. With, perhaps, the monsters winning our sympathy.