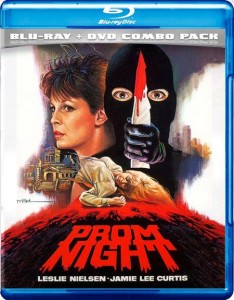 Synapse Films, home of the best looking Blu-rays on the market, has recently given us slasher fanatics a one-two punch of awesome. First there was the excellent but forgotten, Curtains, and now it’s the far better known (it was even named dropped in Scream, so ohhhh, ahhhhh) but equally excellent, Prom Night from 1980. This was the second of star, Jamie Lee Curtis’ slasher trifecta that would cement her as the leading queen of screams in many horror fans’ minds. This movie is the very definition of a slasher classic, and should already be in the movie library of any self-respecting horror fan, so is it worth the cost of getting this HD upgrade? Well grab your tux or gown, don’t forget the corsage, and be sure to spike the punch, we’re going to the prom.

Some years back, a group of young kids go into an abandoned school to play a hide-and-seek like game called “the killer is coming.” During the fun and games, a little girl falls out the window, on to broken mirror below, and is killed. The rest of the kids that we replaying promise each other to never tell anyone what they did, no matter what. Things then jump ahead until those kids are ready to graduate high school, and wouldn’t you know it, someone knows what they did all those years ago, and is hell-bent on revenge. It starts with menacing phone calls (hey, maybe that’s why it was mentioned in Scream all those years later?) and yearbook picture ripping, but once the titular night begins, the bodies begin to hit the floor.

Prom Night is not overly bloody and doesn’t have a really high body count. It also takes some time (like just over an hour) for the first kill to come in, so I know some slasher fans turn their noses up at it or think it’s boring, but I really can’t understand that. It’s got tons of style, is well made, and not to mention, it has awesome disco dancing! Oh hell yeah. Ahem, it also has, in addition to Jamie Lee Curtis, Leslie Nielsen doing some serious work before he became solely known for his deadpan comedies. And while it does take an hour for the carnage to kick off, it uses that time well, fleshing out the characters so that they’re not the usual cardboard cannon fodder that populates most slashers.

The film is also about equal parts mystery movie as it is horror, with a fair bit of whodunit thrown in as to the identity of the killer. Topping the suspect list, there’s the creepy janitor that likes to glare at the school girls and the burnt up sex offender who was blamed for the young girl’s death, who just escaped the psyche ward after killing a nurse. Perhaps the best thing about it is that most of the characters being stalked by the killer are believable, and more importantly, are likable. Yes, as kids they made a stupid mistake, but they are not the completely reprehensible douchebags that seem to populate most (all?) modern horror films. So when a ski-masked killer starts bumping them off, using the shards of a mirror as his weapon of choice, you actually feel bad for them. You know, like you’re supposed to do in a horror film.

In addition to Synapse Film’s usual excellent and exacting video restoration, there are a bunch of extras and special features on this new release. First, there is an audio commentary with director Paul Lynch and screenwriter William Gray. Next there is a retrospective featurette called “The Horrors of Hamilton High” that runs 41 minutes. There is a collection of additional footage that was added for the television broadcast, as was the custom back in the day, that’s 11 minutes long, and a bunch of outtakes from the original shoot. Lastly a still gallery, the original theatrical trailer, and some TV and radio spots round out these very fine extras.

Prom Night is a great film that’s still a load of fun, even all these years later. It is a must have movie for any slasher fan, and this is the must have version of that movie, so consider it very highly recommended.