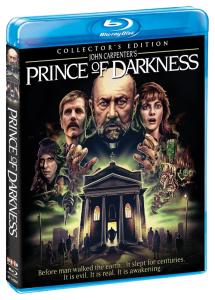 I love this movie to pieces. Not only is this a John Carpenter flick from back when he was still at the top of his game, but it is smart horror. It wants to you think about new ideas and possibilities as much, if not more, than it wants to scare you, and I love smart horror. Sadly, it is so rarely done these days. It is also a very Lovecraftian film, and I am a lover of all things Lovecraft, so that makes me extra happy. And now it is out on Blu-ray for the first time ever by the mad geniuses over at Scream Factory. So SPOILER: this is a must have disc. If you’re in a hurry, you can stop reading and just go get this Blu-ray when it comes out September 24th. But hey, if you’ve got some time to kill, please keep on reading.  I mean I did write a full review, someone should read it to the end, I guess.

First off, if you have never seen this movie before, don’t let the title fool you into thinking that it is a typical Satanic panic film that was all the rage in the 70s and 80s. It has as much in common with the traditional “Satan and the Antichrist try to take over the world” flick as Silent Night, Deadly Night has in common with Miracle on 34th Street. What, don’t believe me? OK, buckle up, you’re in for one weird ride.

Prince of Darkness starts with some Catholic priests looking pensive about something so you might start off thinking that you’re in for an Omen kind of night, but then all of the sudden WHAM, Donald Pleasence shows up sporting a collar. That right there should be reason enough for any horror fan to watch this film, but I’ll keep going. Dr. Loomis, I mean Donald Pleasence, goes to a rundown church in the middle of some unnamed LA ghetto and finds in the basement a very old bible and a huge glass jar filled with swirling, glowing, green liquid. This decanter of evil lime flavoured Kool-Aid so unnerves the priest that he calls in an Egg Shen, I mean egghead theoretical physics professor and his class of smarty pants to spend the weekend in the creepy church so that they can study the green goo, carbon date the container holding it, and decipher the ancient bible that has been rewritten, word on top of word, countless times and in numerous languages. The grad students all agree to the sleepover, but little do they realize that the church is slowly becoming surrounded by a large group of crazy people lead by original shock rocker, Alice Cooper.

Then Alice kills a computer nerd with a bicycle. No really, he does.

“But when does this start to get all weird and Lovecrafty?” Well it always was, but Carpenter expertly introduces themes of cosmic horror subtly at first, and then more and more frequently, that by this movie’s end is almost weirdapalooza. Before the credits roll on this flick, everything you thought you knew about the nature of the universe will be proven wrong, but before we go there I guess I should post a warning, so…

First and foremost Prince of Darkness is filled with “secrets man was not meant to know”™. Such as there might not be a God, but there could an Antigod, Jesus was an alien and insane, all the major religions of mankind are false, oh and the green goo in the can in the basement? Yeah, that’s the devil. Worst yet, the devil’s got a bigger, badder daddy who’s currently trapped between time and space, but he’s getting things ready for his big comeback. Also there are strange theories on the order of the universe and the very nature of good and evil are wildly thrown around while theoretical scientific ideas are proved to be factual, such as the possibility of time travel.

Yep, all that in one movie. And Carpenter handles it all masterfully with creepy atmosphere, moments of dread, a few jump scares, some groovy gross out gags, and even some much needed funny bits that are far more hit than miss. It is very much a little bit of everything approach, but the end result is a savory stew instead of a jumbled mess such ambition could have produced from a far less capable director.

Befitting a movie as cool as Prince of Darkness, Scream Factory has put out a hell (heh, see what I did there?) of a fine Blu-ray. There is an audio commentary with writer/director John Carpenter and a 10 minute interview with the same man. There is an over 9 minute interview with Alice Cooper and an interview with actor and special visual effects supervisor Robert Grasmere that runs over 12 minutes. There is a 10 minute featurette with co-composer Alan Howarth on the music from the film. Still want more? OK, this Blu-ray has the alternate opening to the movie that was used in the TV version. It has one of those always awesome Horror’s Hallowed Ground features where host Sean Clark goes back to all the old locations where the movie was made. Radio spots, a trailer, still gallery, and even an Easter egg or two bring this wicked collection of extras to a close.

Prince of Darkness is one of Carpenter’s best movies, and that alone is reason enough to get it if you haven’t already. If you already have the DVD, the Blu-ray is a damn fine upgrade. The picture looks amazing and it has extras galore. Consider it a must have.