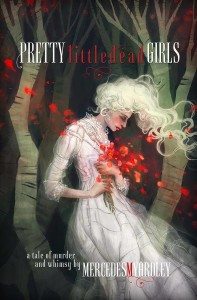 From the beginning, the star girl’s blood longed to drip back into the desert. The wind, the sand, screamed for her flesh, and the ethereal girl, finding her heart still beating, runs as far and as fast as she can. But even a falling, dying star must come to rest at some point, and it’s what is waiting at the end of that run that determines whether or not the star will fade away or spark anew.

Bryony Adams’ destiny is bound up with the sharp edge of a razor, the slow tracing of a knife over flesh. She is a girl wed to death. A girl whose destiny is written in blood. One by one, death touches the people surrounding her, and Bryony learns to run from the very thing that has laid claim to her. When she meets Eddie, however, she pauses long enough to fall in love. Fate, as it is wont to do, always find those who’ve rested their weary bones too long, and the natural pull Bryony exerts on those around her attracts the attention of the man who would pluck the life from her. Bryony’s final run toward the things she’s always wanted—love, family—are destined to end in decay, but stars don’t burn out easily.

I’ve read Ms. Yardley’s stories and her previous collection, Beautiful Sorrows, was a lovely grouping of darkly tinged fairy tales. Exactly the sorts of stories that I write and want to read. Pretty Little Dead Girls follows in this vein, and despite the grim subject matter, there is a sense of whimsy and beauty that abound. So before I say this, I want to make it abundantly clear that I’m a fan of Ms. Yardleys.

Despite the lyrical prose, there were sections of the book that I felt were too whimsical. Some of the dialogue felt childish, particularly the first major interaction between Bryony and Eddie, and overall the interactions felt somewhat stilted or a bit too over the top. Some readers may look at this as charming, but as I read, I found myself distracted by moments in the novel when I thought to myself, “Would anyone really speak this way?” And because of this, I had a difficult time connecting to Bryony as a character because I never saw her as real.

The opening and closing of the novel had fewer of these moments, and I was immediately swept into the world at the beginning of the book, but the middle was rife with these interchanges, —another moment being Bryony’s conversations with her father—and I found myself skimming large sections of the middle when I hit these moments of dialogue.

For those who enjoy their horror with a taste of fairy tale, Pretty Little Dead Girls will satisfy.