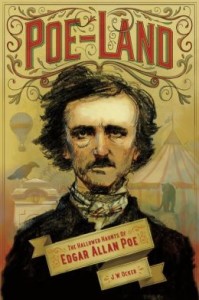 J.W. Ocker’s writing style is more akin to sitting down over a beer with a friend and having a conversation about mutual friends. Only in this case, make it a copita of amontillado and the mutual friend is Edgar Allan Poe.

Don’t let the author’s effortless conversational style lull you into a false sense of casualness. This is a scholarly, meticulously researched immersion into the phenomena of Poe. Starting with Poe’s inauspicious beginnings in Boston, and the current, begrudging acceptance of Poe’s place in the Hub’s literary pantheon, Ocker travels down the East Coast  to those places that call Poe their own, regardless of how Poe’s feelings on the topic. From Massachusetts to Rhode Island, then on to New York, Philadelphia, Baltimore, Richmond, and South Carolina with a side trip to the UK.

One example is Westford, MA marker near the Heywood house where Poe stayed. He tracks down the man who had the marker installed and discovers it was not just devotion to Poe, but an indignant response to a marker installed to commemorate a more famous Westford resident, the alleged effigy of a 14th century Scottish knight. Throw in a little Jack Kerouac and the use of black Rust-oleum to touch up the raven on the Poe marker, and the reader (and Ocker) leave town with a deeper understand of the motivations behind that local landmark.

The travels and insights continue through the book – gravesites, historic sites and artifacts revered to the point where you almost expect them to be stored in a reliquary. When Ocker arrives in Providence, RI to see where Poe courted Sarah Whitman, he stops by the Providence Athenaeum to see the copy of Poe’s anonymously published poem “Ulalume,” autographed at Whitman’s urging. But he is not alone, for the author finds himself exploring Poe’s connections to Providence in the middle of a convention dedicated to that other horror writer with ties to Providence, one Howard Phillips Lovecraft.

Amply illustrated with enough Poe background material to explain why he’s visiting a given location, the book is filled with quirky anecdotal material. If you’re looking for a travel guide to Poe sites, this is not your book. I emphasize this, and so does the author; Poe-Land was never meant to be a travel guide. If anything, it’s a travel diary of Ocker’s road trips exploring the perennial appeal/obsession with the master of the macabre.

This is one road trip you will not want to miss.