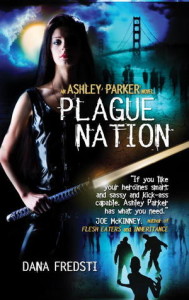 I was (and still am) a huge Buffy the Vampire Slayer fan; like Joss Whedon, I greatly enjoy a strong female heroine who is just as fragile as she is tough.  For this reason, I decided to give author Dana Fredsti’s PLAGUE novels a try.  I’m glad I did, too…the heroine, Ashley Parker, is not your typical college girl.  She’s a bad-ass zombie killer that would give Peter Parker a run for his money in the quip-while-fighting department.

If you are not familiar with PLAGUE NATION, here is the plot synopsis courtesy of Titan Books:

The undead have been defeated in Redwood Grove, but reports of similar outbreaks are coming in.  What seemed to be an isolated event is turning into a pandemic.  The last thing Ashley Parker wanted when she went to college was to become a zombie hunter.  But she is one of a select few who are immune to the virus.  Gifted with enhanced speed, strength, and senses, she is recruited by a shadowy organization that’s existed for centuries, it’s sole purpose to combat the zombie threat.  Dark secrets begin to emerge, and when an unknown enemy strikes, Ashley and the other wild cards embark on a desperate mission to reach San Francisco.  If they fail, the plague will sweep the nation unchecked.  And the person she cares for most may die.  Or worse.

When I found out Fredsti worked on Sam Raimi’s ARMY OF DARKNESS as an armorer’s assistant and sword-fighting Deadite, I knew immediately that I had to give her work a shot.  Raimi is one of my idols, not to mention a horror icon, so just the fact that she was on the set of one of my favorite movies of all time was enough merit for me to give her a look.

I have to commend Fredsti for introducing a riveting zombie series into a saturated market.  I was curious when I first started reading the first book, PLAGUE TOWN, wondering if this would be another rehash of what had already been done.  But Fredsti skillfully blends light humor with dark zombie horror, and the result is an excellent series that is worthy of any horror fan’s consideration.

PLAGUE NATION is a perfect continuation of the story, picking up very close to where the first book ends.  And like its predecessor, it is written well and flows at a nice pace.  The action scenes are not bogged down with unnecessary exposition and there is never any over-emphasized description.

The characters are pretty well fleshed out and believable, although there are one or two that some readers might consider over-the-top.  Still, they all mesh well in the story and help to create the vivid, nightmarish world in which the series is set.

If I were forced to find a flaw with this series, I don’t think I could.  I tore through books one and two within the period of a week, and now I’m eagerly awaiting book three.  I highly recommend giving these books a look.  They are quick and enjoyable reads that zombie fans should love.  Both books are available now.